Goran Stoparic, former member of the special police unit Scorpions, has identified four persons who he was ‘sure’ opened fire on nineteen women and children in Podujevo on 28 March 1999. Fourteen persons were killed in that incident 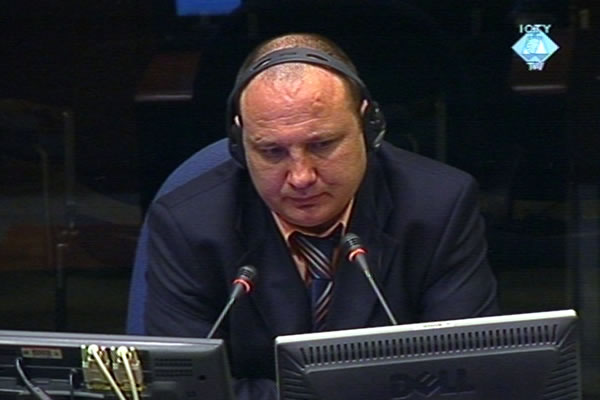 Goran Stoparić, svjedok na suđenju Vlastimiru Đorđeviću
After two days of closed session the hearing at the trial of General Vlastimir Djordjevic continued with the evidence of a former member of the Scorpions unit Goran Stoparic. He recounted the Scorpions’ war career and their involvement in the crime against 19 women and children in the Kosovo town of Podujevo. The statement the witness gave to the OTP investigators in July 2006 was tendered into evidence together with the transcript of his testimony at the trial of the Kosovo Six, former Serbian officials headed by Milan Milutinovic. Stoparic testified at the trial of the Serbian Radical Party leader, Vojislav Seselj, about the crimes in Vukovar.

Stoparic was sent to Kosovo on the eve of the NATO campaign, on 24 March 1999, together with 120 members of the Scorpions units. At least half of them had war experience and took part in the crimes in Croatia and BH. The notorious unit re-formed on the initiative of some people from the police and was sent to Kosovo as the ‘reserve force’ of the Special Anti-Terrorist Unit, the witness maintained. The SAJ was the elite unit of the Serbian MUP Department of Public Security, Stoparic explained. At the time, the department was headed by the accused Djordjevic.

Describing the ‘unfortunate incident’ in Podujevo, Stoparic said that in a yard, behind a house where his unit intended to stay, he saw several of his fellow fighters searching a group of women and children. The witness contends that he had personally prevented them from continuing, telling the women and children to go out, into the street, believing they would be safer there. Some other police officers told them to return to the yard. Moments later the witness heard ‘scattered bursts of gunfire’ from a ‘maximum of five automatic rifles. At least 25 shots were fired from each of them’.

He reflexively moved towards the yard but his friend Milovan Tomic took him by the hand. ‘You fool, stop, don’t make your hands dirty’, Tomic told the witness. Sometime later the two of them peeked out and saw ‘piled-up bodies’ in the yard. Several Scorpions stood by and the witness could identify four of them as Sasa Cvjetan, Dejan Demirovic, Dragan Borojevic and Dragan Medic. ‘I am sure that they committed the crime’, Stoparic concluded.

Zoran Simovic, one of the SAJ commanders, then lined up the Scorpions in the street telling them ‘You morons, you pigs, what have you done, you’re impossible to work with’. Then, the witness recounted, they were put on the buses and taken back to Serbia. The Podujevo crime, however, was not investigated. A month and a half later, the whole unit was once again sent to Kosovo. Stoparic remained there until early May 1999 when he was seriously injured. By that time, he saw the police special units burn down Albanian houses on a number of occasions.

In his cross-examination, Djordjevic’s defense counsel Veljko Djuric tried to prove that by late May 1999 the investigation of the Podujevo crime was already launched; Sasa Cvjetan was finally sentenced to 20 years. Stoparic allowed that it was possible, it was more likely that Cvjetan was arrested after the NATO campaign, in June or July 1999. In April 2008 the war crimes prosecutor in Belgrade indicted four other Scorpions for the crime in Podujevo. Two of them were identified by Stoparic.

The trial of Vlastimir Djordjevic went on with the evidence of Mahmut Halimi who spoke of crimes against Kosovo Albanians in Kosovska Mitrovica and its surroundings.