At the trial of police general Vlastimir Djordjevic, Nazlije Bala describes how she and her family, together with hundreds of other Albanian civilians from Kosovo, were expelled from her Pristina apartments on 29 March 1999. They were taken to the railway station and deported to Macedonia by train 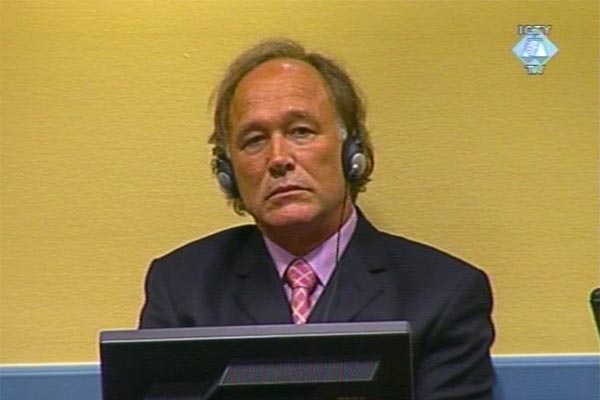 Vlastimir Djordjevic in the courtroom
The prosecution continued its case today at the trial of former chief of the Serbian MUP Department of Public Security with the evidence on the expulsion of Kosovo Albanians from Pristina. Witness Nazlije Bala described in detail how she, her family and other civilians who took shelter in her apartment in the spring of 1999 were forced to leave Pristina. They were deported to the Macedonian border by train. Hundred of other residents of Pristina faced the same fate, the prosecution alleged. General Djordjevic is charged with the murder of thousands and deportation of some 800,000 Kosovo Albanians in 1999.

On 29 March 1999, Nazlije Bala recounted, a VJ officer and a local traffic police officer she knew as Ivica entered her apartment. They ordered everybody there to join the refugee column that had already formed. The column was escorted by members of the army, police and paramilitary formations, the witness said. They didn’t allow anybody to leave it on the way to the railway station. There they boarded the trains on the orders of the police. The train headed for the Macedonian border.

The witness’s train had 30 cars and, as she put it, was so packed with people that it was impossible to breathe. Each compartment, the witness said, had 50 persons inside and nobody could move ‘right or left’. Children were placed in baggage compartments. A few hours later, the train stopped at the Djeneral Jankovic border crossing. The people from Pristina disembarked there. A number of them were robbed and many were stripped of their personal documents, the witness said. ‘They didn’t take anything from us because we didn’t take anything with us when we were forced to leave the house in five minutes’, the witness added.

The final stage of the deportation, according to the witness, was organized by the Serb soldiers and police officers who forced the people from the train to cross the border on foot. The people were told to stick close to the railway tracks because there were mines everywhere. Fifteen days after the arrival in Macedonia, the witness gave her first statement to the OTP investigators. That statement and two others given in 2001 and 2006, together with the transcript of her evidence at the trial of Milan Milutinovic and five other former Serbian officials, were admitted into evidence today.

In the cross-examination, Djordjevic’s defense counsel Veljko Djuric tried to discredit the witness, noting that the NGOs Nazlije Bala worked for as a human rights activist in the nineties were funded by foreigners and the Kosovo government in exile. They thus investigated only the ordeals of Albanians and did not care for the Serbs. Another accusation was that the women’s right organization she chaired in 1999 formed ‘women patrols’ that followed the military and police activities. The witness categorically denied those allegations.