‘Your Honors, protect me from her’, cried Bruno Stojic after Vesna Alaburic, Milivoj Petkovic’s defense counsel, brought up Tihomir Blaskic’s defense case: the HVO units in Central Bosnia were under Stojic’s command. Croatia has cleared Ivan Bandic to testify about his intelligence career in HIS, but he’ll do it in closed session 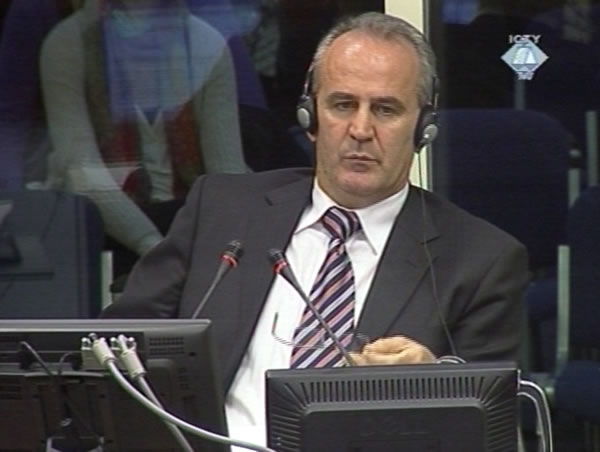 Stojic’s reaction followed when Alaburic said that Blaskic's defense counsel Ante Nobilo argued that the HVO special units in Central Bosnia had been under Bruno Stojic's direct command. Alaburic put that to the witness Ivan Bandic, former operative in the Herceg Bosna Security and Information Service, as she cross-examined him.

When the witness replied that Nobilo’s claims were not based on any evidence, Stojic’s defense counsel Senka Nozica responded, saying that Petkovic’s defense was trying to blame her client for the crimes in Central Bosnia. Visibly upset, Stojic then stood up saying that such accusations made no sense. He ‘had evidence that Blaskic was in direct command of the Vitezovi units’, the witness added.

Petkovic gave evidence in the defense of Tihomir Blaskic, former HVO commander in Central Bosnia. Blaskic was first sentenced to 45 years but the Appeals Chamber overturned that judgment and sentenced Blaskic to 9 years. In 2005, the prosecution sought a review of that judgment claiming that it had managed to gather evidence that Blaskic had personally ordered the attacks on Muslim villages in the Vitez municipality on 16 April 1993. The motion was rejected.

Stojic’s lawyers today said that the authorities in Zagreb had granted permission to Bandic, now serving as the Croatian ambassador to Hungary, to talk about his involvement with the Croatian Information Service, provided he testified in closed session.

Yesterday the witness refused to answer questions about his work in the Croatian secret service; as he put it, Zagreb had not given him clearance to do so. After that, the prosecution announced it intended to cross-examine Bandic about that. The Trial Chamber ordered Stojic’s defense to ask the Croatian authorities to clear Bandic to give evidence on his career with the HIS.

The prosecution objected to the decision to have the triple agent testify in closed session. Until the war, Bandic worked for the Yugoslav state security service, then switched to the Herceg Bosna Security and Intelligence Service when the war broke out. After the war, Bandic worked for the Croatian Intelligence Service headed at that time by Miroslav Tudjman, son of the Croatian president.

Before the hearing went into closed session, the prosecution clearly indicated it intended to put it to the witness that in 1997 and 1998 he worked on ‘sabotaging’ the ICTY prosecution and ‘some trials of Bosnian Croats’.