In the cross-examination of Dragan Juric the prosecution put it to him that the HVO, and not BH Army, was responsible for the conflicts in Konjic. The witness denied the allegations that the HVO cooperated with Serbs. Juric claims he had ‘high fever’ when he said that Serbs and Croats would ‘together drive the Muslims out’ from that territory. His words were published in an article, Forwards, for fatherland and the king 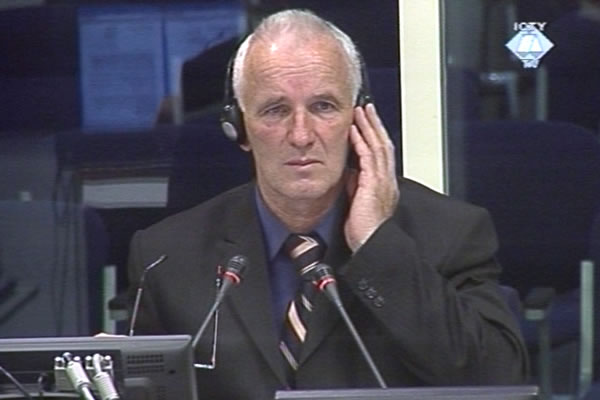 Dragan Jurić, svjedok odbrane Brune Stojića
In the first half of his testimony as Bruno Stojic’s defense witness, Dragan Juric, former commander of the Independent Battalion in the Herceg Stjepan Brigade, blamed the BH Army for the conflict that broke out in the Konjic area. On 23 March 1993, the BH Army troops attacked the HVO training center in Bradina. The same day the BH Army disarmed some 150 Croatian soldiers in Konjic. The witness believes that the BH Army planned a large-scale attack, prevented by sudden snow which hindered the troop movements.

The BH Army launched its attack against the HVO positions in the night of 14 April 1993, the witness claims. After days of fighting, the witness and elements of the Herceg Stjepan Brigade withdrew to Turija, Zabrdje and Zaslivlje where they found themselves sandwiched between the BH Army and the VRS. They stayed there for eleven months without any contact with the HVO Main Staff, the witness contends.

In its cross-examination the prosecution put it to the witness that the HVO, and not BH Army, was responsible for the conflicts, corroborating the claim with the decision brought by the Herceg Bosna Presidency of 10 April 1992. The decision defines the HVO as the ‘only legitimate armed force in Herceg Bosna’ and labels all other military formations as ‘illegal and enemy’. According to the prosecution documents, this decision was sent to the HVO military command. The witness saw those documents for the first time now adding that it was hard for him to comment because he ‘doesn’t understand politics’.

The prosecution went on to note that the HVO provoked the conflict in Konjic after it established parallel executive bodies – following Mate Boban’s orders – in an attempt to ‘take over power’ from the legitimate BH authorities in the town. In contravention of the Constitutional Court’s ruling that Herceg Bosna was an unlawful government, the HVO implemented its regulations and put up Herceg Bosna symbols on major institutions.

The prosecution then alleged that in early 1993 the HVO tried to implement the Vance-Owen peace agreement unilaterally. The HVO, the prosecution said, claimed that the Vance-Owen plan required the BH Army to resubordinate itself to the HVO in three ‘Croatian provinces’, which included Konjic. The witness said he had heard nothing of that plan and nobody in Konjic had been talking about it. As the witness contended, he knew nothing about the 1939 Banovina Hrvatska and was unaware it included Konjic. The witness reluctantly said that he knew Konjic was part of Herceg Bosna when prodded by the judges.

The prosecution put it to the witness that the HVO in Konjic collaborated with the VRS but the witness denied this allegation. The witness stood by his words even when he was shown a document where he personally addressed the VRS command explaining whom to contact about ‘the joint operations’ against Muslims.

The prosecution concluded the cross-examination with an interview the witness gave to the Belgrade weekly Vreme in July 1993. In an article entitled Forwards for fatherland and king, the witness said, among other things, that there were no ‘conflicts’ between Serbs and Croats anymore; neither could live with the Muslims. ‘We hope to be able to force them out of this territory together’, a Vreme journalist quoted Dragan Juric as saying.

Few days before giving the interview, the witness was wounded and forced to seek medical help in a Serbian hospital; as he put it, he was in pain, ‘running a high fever’ and in fear because seven Serbian police officers were around him, listening to every word he said, the witness explained.

The defense of former Herceg Bosna defense minister Bruno Stojic rested its case after Dragan Juric’s testimony. On Monday, 4 May 2009, Slobodan Praljak will open his case. He will take the stand to testify in his own defense.