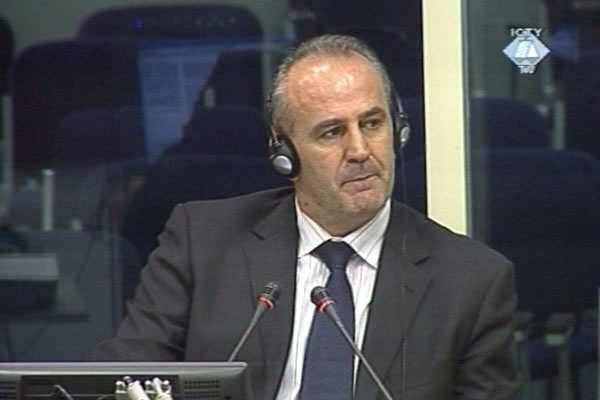 Ivan Bandić, svjedok odbrane Brune Stojića
Ivan Bandic, former intelligence officer with the Security Intelligence Service of the Croatian Community of Herceg Bosna, continued his evidence today at the trial of the former Bosnian Croat leaders. Mate Boban had supreme authority over the Convicts’ Battalion, Bandic said today. The witness confirmed he was aware of the ‘unusual relationship’ between the former HZ HB president and the commander of the Convicts’ Battalion, Mladen Naletilic Tuta. Tuta often presented himself as Boban’s ‘personal advisor’.

The prisons in Ljubuski and Heliodrom were the only military prisons under the jurisdiction of the HZ HB Defense Department headed by the accused Bruno Stojic, the witness said. He could never understand, the witness went on to say, the exact status of the camps in Dretelj, Gabela and Grabovina near Neum – where civilians were detained together with prisoners of war. Tomo Sakota, was the warden in Dretelj, and later he was in charge of all the prison camps in Herceg Bosna, the witness noted. Sakota was appointed by Boban.

In his examination-in chief, the witness claimed that in the summer of 1993 he was placed at the disposal of the HVO Main Staff. General Milivoj Petkovic’s defense then tried to prove that the witness was there only ‘formally’. According to Petkovic’s defense, the witness was sent to Central Bosnia in the summer of 1993 to do a job for the Security Administration and his position as Petkovic’s assistant for security in the Main Staff was just his cover. Vesna Alaburic, Petkovic’s defense counsel, then pointed to an official note of the Croatian MUP of 4 July 2000, where the witness addressed that matter. Bandic replied that as a ‘legalist’ he respected the legitimate institutions and could not discuss the issue without getting clearance from the Croatian authorities.

Prosecutor Douglas Stringer indicated he intended to examine the witness in detail about his activities after he left Herceg Bosna in 1994 and in particular about his activities as a Croatian government operative in 1997 and 1998 and in 2000 when the witness worked for the Croatian Embassy in The Hague. If the prosecution is unable to do that, it will ask for Bandic’s testimony to be stricken from the record.

The Trial Chamber then ordered Bruno Stojic’s defense to contact the Croatian authorities by close of business today and ask them to clear the witness to discuss those issues. The defense was also told to take into consideration possible protective measures for this witness in light of his ‘delicate’ situation.