WHO STIRRED UP TROUBLE BETWEEN CROATS AND MUSLIMS?

Through Tihomir Majic, former chief of a HVO depot in Grude, Bruno Stojic’s defense has tried to show that Bosnian Croats and the Republic of Croatia ‘had friendly intentions’ towards the BH Army. The witness blames the conflict on Serbs and their secret agents who stirred up trouble between Croats and Muslims 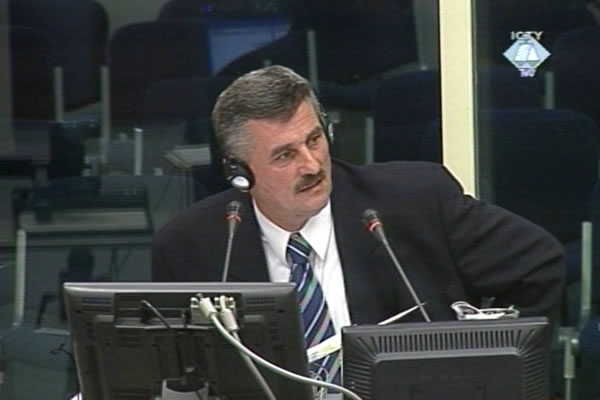 Tihomir Majić, svjedok odbrane Brune Stojića
Bruno Stojic's defense used the evidence of former chief of the HVO arms depot in Grude Tihomir Majic to show that Bosnian Croats and the Republic of Croatia provided the BH Army with weapons and ammunition in 1992 and in early 1993.

Majic worked in the depot from April 1992 to May 1993 when he was appointed deputy assistant to Ante Jelavic, the then logistics chief in the defense department of the Croatian Community of Herceg Bosna.

As the witness recounted, the HVO depot was located in a forest near Grude; he stayed there ‘day and night’. On many occasions he issued various quantities of weapons, materiel and equipment to the BH Army personnel, the witness claimed. The defense corroborated this with the BH Army requests, approvals granted by Herceg Bosna officials and shipping lists from the depot where the witness worked. The defense showed a number of documents from the Croatian Defense Ministry with similar contents. These, the defense alleges, show that the neighboring Croatia ‘had friendly intentions’ towards BH.

As the first conflict between the HVO and the BH Army broke out in late 1992, the judges asked the witness to explain why the Croats were supplying arms to their enemy. As far as he was concerned, the witness replied, the BH Army was never an enemy. The ‘clique’ from the former Yugoslavia was to blame for the conflict, the witness explained; in order to ‘protect itself the clique wreaked chaos for others’.

The witness made it clear that the ‘clique’ comprised Serbs from the former Yugoslavia who used their agents to stir up the conflict between the HVO and the BH Army to divert the attention from what they were doing. When the judges asked the witness if he had evidence to substantiate his claims, the witness said that he based his opinion on what he personally knew about the former JNA officers. However, the witness was not asked and didn’t go into further details.

In the cross-examination, the prosecution noted that the HVO gave weapons to the BH Army units that were cooperating closely with the HVO, in Tuzla, Posavina and in Sarajevo until late 1993. Prosecutor Kimberly West implied that during the war the HVO provided weapons to the Serb side too. West referred to Ante Jelavic’s report where he repeatedly mentions the provisions for the ‘XY’ side; the prosecution interprets it to mean - the Serbs. The witness claims that no weapons or materiel were issued to the Serb side from the HVO depot in Grude, adding that he didn’t know who the ‘XY’ side mentioned in his former superior’s report was.