Former HVO spokesman Veso Vegar contends that there was no ethnic cleansing of Muslims in Mostar in the summer of 1993. Vegar has never heard of the mass expulsion of Muslims, but admits that there were some isolated cases when ‘out-of-control criminal groups’ broke into Muslim apartments 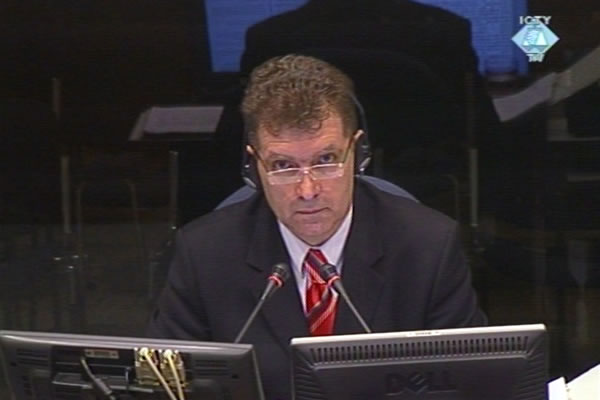 Veso Vegar, svjedok odbrane Brune Stojića
Former spokesman of the Defense Department in the Croatian Community of Herceg Bosna Veso Vegar contends that Serbs and Muslims were the ones who did the ethnic cleansing during the war in BH; Croats ‘only evacuated’ Muslim population ‘for their own safety’. The witness claims that he never heard of the mass expulsion of Muslim families from Western Mostar after the conflict between the HVO and the BH Army broke out there.

Veso Vegar served as chief of the morale section in the Defense Department in the Croatian Community of Herceg Bosna. One of his tasks was keeping the public informed about the developments on the front lines and about other important issues under the jurisdiction of the defense department. Although the witness denied this, according to the prosecutor and the newspaper articles published in 1993, he was also the spokesman of the HVO Main Staff.

In his cross-examination, prosecutor Kenneth Scott brought up a series of newspapers articles and reports drafted by the EU monitors about mass ‘evictions’ from Western to Eastern Mostar. Reuters reported that the HVO set free 50 of some 2,000 Muslim civilian detainees, quoting Veso Vegar who said that ‘the remaining Muslims will be freed when Croats held captive by the BH Army in Jablanica and Konjic are released’.

As the witness explained, when the conflict broke out in Mostar on 9 May 1993, civilians from ‘all ethnic groups’ and not only Muslims were evacuated from neighborhoods close to areas where there was combat. There were only ‘isolated cases’ where various out-of-control criminal groups expelled Muslim families from the apartments that were broken into, the witness noted. There were no planned expulsion and ethnic cleansing in Mostar, the witness contends.

The prosecutor implied that the HVO evicted Muslims, and not ‘members of all ethnic groups’, referring to the adjudicated fact that ‘the detention of civilians in Mostar was one in a discriminatory way, and was aimed at the Muslim population while their Croat neighbors were excluded’. The defense of Jadranko Prlic, former Herceg Bosna prime minister, commented that adjudicated facts were ‘contestable’.

When the prosecutor showed a document in which Stojic ordered that the families of the troops serving in the Ludvig Pavlovic Regiment were to be given ten apartments owned by the former JNA in late May 1993, the accused Bruno Stojic stood up and objected. ‘It is hard for me to listen to the prosecutor’s lies’, he said, claiming that the document had ‘nothing to do’ with what the prosecutor argued. ‘I say that with full responsibility’, Stojic said, adding that he could not ‘sit and take it quietly anymore’. ‘There were six of us, and now we are two’, Stojic said referring to the fact that only he and Slobodan Praljak were present at the trial today.

Valentin Coric was the first to leave the courtroom in protest against the length of the trial. Several days later, Jadranko Prlic joined him because he was displeased with a judges’ decision. Former chief of the HVO Main Staff Milivoj Petkovic is absent because of ill health and the reason why Berislav Pusic failed to appear today was not disclosed.

Prlic’s lawyer Michael Karnavas in the meantime announced that his client would soon ask the Trial Chamber to provisionally release him during the trial because it would allow him to ‘contribute more to his own defense’.