Bruno Stojic’s defense has tried to prove that the BH Army provoked the conflicts between Croats and Muslims. Former Bosnian Croat leaders pursued a peaceful policy, while the BH Army was ‘belligerent’, the defense has argued 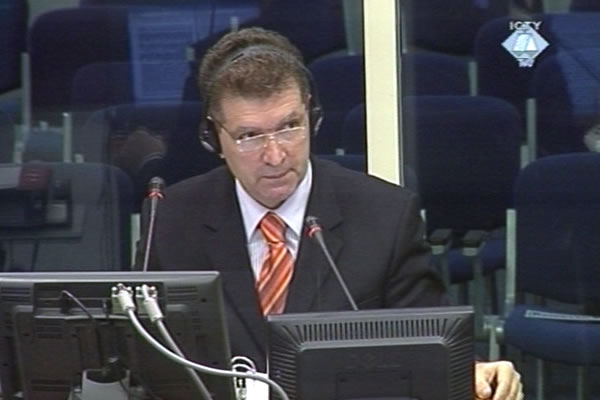 Veso Vegar, svjedok odbrane Brune Stojića
Continuing the examination of Veso Vegar, former spokesperson of the defense department in the Croatian Community of Herceg Bosna, the defense is trying to prove that the former Bosnian Croat leaders pursued ‘peaceful’ policies towards Muslims, whereas the BH Army was ‘belligerent’, provoking conflicts and ‘ethnically cleansing Croats’ in Central Bosnia.

Stojic’s defense counsel Senka Nozica quoted from a radio interview the former commander of the BH Army 4th Corps Arif Pasalic gave on 30 June 1993, the day when the BH Army took over the Northern Camp barracks in Mostar. ‘There’s no living side by side with the Ustashas anymore. We can only live with honest Croats and loyal Serbs’, Pasalic said.

According to the witness, Pasalic considered the ‘few’ Croats and Serbs who remained in the BH Army to be ‘honest and loyal’. ‘Obviously’, the witness added, this was a statement of a man ‘full of hatred’ towards persons who used to be his friends; this was just like the communists who talked about ‘workers, farmers and the honest intelligentsia’, which implied that some were honest and others weren’t.

To contradict the document, Nozica showed a communiqué by Bruno Stojic and Jadranko Prlic made public on the same day as Pasalic’s speech. The announcement states that ‘the suffering of Croatian people must stop; the aggression must be countered by an attack’. That speech, in the words of the witness, ‘unlike the previous one’ contains ‘not a single word of hate’.

The defense then brought up ‘dramatic events’ that preceded Stojic’s and Prlic’s ‘call to defense’. A report about the civilians and the army being forced to flee ‘before the Muslim knives’ drafted by Tihomir Blaskic on 8 June 1993 was shown. Blaskic’s report also called for a corridor to be set up and secured and for accommodation to be found for the Croatian population from that area.

On the other hand, the defense argued that the HVO didn’t divide people on ethnic lines, showing a report from the head of the Federal Pension and Disability Fund, Nadir Kovacevic. The report indicates that the HVO paid out some 2,000 pensions to Muslims in Western Mostar in late 1993 and early 1994.

Slobodan Praljak's defense noted that the JNA had destroyed all the bridges (except the Old one) and mosques in Mostar listed in the indictment. After the JNA’s withdrawal, according to the evidence called by the defense, it was mostly Muslims who moved into abandoned Serb apartments in Western Mostar. Many of them remained there after the conflict broke out between the BH Army and the HVO, the witness maintained. When the judges asked him to name at least some Muslims from his neighborhood who stayed in their apartments, the witness couldn’t remember a single one, despite his claims that there were ‘thousands’ of them.