Slobodan Bozic, Bruno Stojic’s former deputy, claims that the prosecution documents about the systematic burning and destruction of mosques in Sovici and Doljani near Jablanica in April 1993 are forgeries. It remains a ‘mystery’ how those documents – if they were indeed forged – got in the Croatian Archive which handed them over to the prosecution 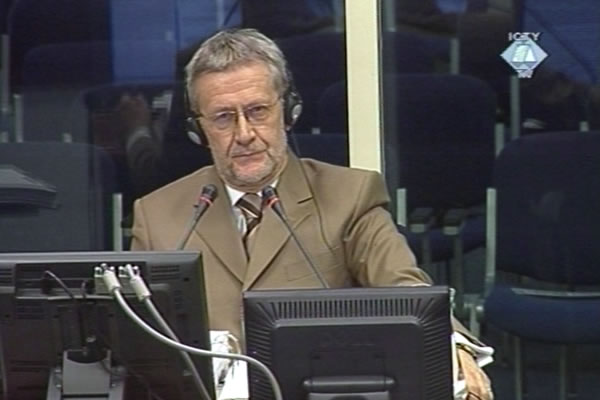 Slobodan Božić, svjedok odbrane Brune Stojića
Bruno Stojic’s former deputy Slobodan Bozic argued in his examination-in chief that the prosecution documents about the systematic burning and destruction of mosques in Sovici and Doljani near Jablanica in late April 1993 were forgeries. This claim is corroborated, the witness says, by what he was told by Marko Rozic, former chief of the Jablanica department of the defense, who signed one of those documents.

Stojic’s defense showed the ‘controversial’ documents to the witness in the examination-in chief. The public learned only snippets about the documents themselves and heard the witness’s claim that the documents did not have proper stamps and were indeed ‘forgeries’. Their contents remained undisclosed.

Presiding judge Jean-Claude Antonetti then shed more light on the documents that incriminate the former Bosnian Croat leaders when the witness was cross-examined by General Milivoj Petkovic’s defense. Antonetti said those documents were ‘horrible’ as they describe how ‘Muslim houses were burned down after the cessation of hostilities between the HVO and the BH Army on the orders of HVO commanders’.

A document sent to the HZ HB Defense Department and ‘Slobodan Bozic personally’ on 23 April 1993 says that about 422 civilians, mostly women and children, and 25 men of military age were detained and questioned in Sovici and Doljani; 94 men were taken to a prison in Ljubuski. After the conflict stopped ‘all the Muslim houses were burned and two mosques were torn down in accordance with the orders received from the superior command’. The document was signed by Marko Rozic, head of the Jablanica defense department.

As the witness contends, he never got that document; he saw it for the first time in late January or early February 1996 when it was published in the Mostar magazine Sloboda. His name was mentioned in an ‘ugly context’ and the witness got in touch with Rozic, who told him that he ‘never signed anything of the sort’ adding that it ‘obviously’ was a forgery. About a month ago, Rozic repeated his claim. Because of this ‘forgery’, Rozic told Bozic, he had his signature certified before the Municipal Court in Siroki Brijeg when Mladen Naletilic Tuta and Vinko Martinovic Stela were on trial.

Prosecutor Kenneth Scott will begin his cross-examination of the witness tomorrow.