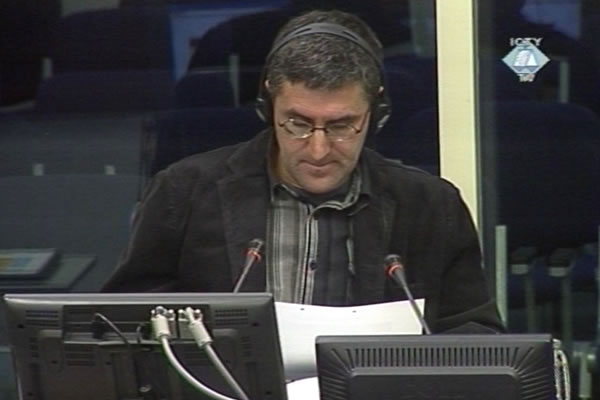 Attorney Michael Karnavas tried to get the witness to confirm that the former Herceg Bosna prime minister Jadranko Prlic was ‘one among the equal’ members of the HVO collective executive body who ‘only signed’ decisions reached by the HVO in its sessions. According to Prlic’s defense, the documents were signed by Prlic only because somebody had to sign them.

The witness didn’t contest that the HVO was a collective executive body; however, its members were not equal, he claimed. The documents he analyzed as he drafted his report led him to conclude that the HVO had its leader, Prlic, and that the other members were responsible to him.

When Prlic’s lawyer persistently tried to get the answer he wanted from the witness, Bruno Stojic’s defense counsel Senka Nozica reacted. The two lawyers could not agree about Prlic’s authority and a heated debate ensued. The judges had to step in, noting this was a ‘complex legal issue’. The witness, who is not a lawyer, couldn’t say anything more about it, the judges concluded.

In his cross-examination of the witness, the accused Slobodan Praljak argued that the military police and the security service SIS were not subordinate to the HVO Main Staff. According to Praljak, they were subordinate to the defense department., while Milivoj Petkovic’s defense claimed the defense department was part of the military chain of command. Petkovic's defense view differs from the witness's view. This was corroborated by a series of orders Stojic issued to the HVO operational zones and brigades.

When the expert witness called by Stojic’s defense was cross-examined by Petkovic’s defense counsel Vesna Alaburic, harsh words were once more exchanged in the courtroom by the lawyers of two defense teams. The defense strategies of the six former Bosnian Croat leaders are apparently diverging as the trial progresses, indicating their differing attitudes to the responsibility of civilian and military leaders for crimes alleged in the indictment.

Petkovic’s defense will complete its cross-examination tomorrow. The witness will then be examined by the defense of former police minister Valentin Coric and the prosecution.