WHAT PANDUREVIC KNEW OF EXECUTIONS IN SREBRENICA

As he continues with his testimony in his own defense at the trial of Bosnian Serb military and police officers charged with crimes in Srebrenica and Zepa, former Zvornik Brigade commander argues that his combat report of 18 July 1995 was the ‘only official document speaking, in a rather euphemistic manner, about what was going on with executions of prisoners of war’ 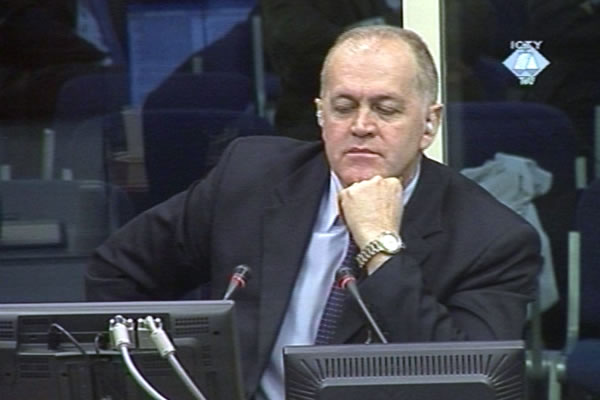 Vinko Pandurević u sudnici Tribunala
In an interim combat report to the Drina Corps command on 18 July 1995, Zvornik Brigade commander Vinko Pandurevic said that Zvornik municipality had been ‘overflowing with the Turks from Srebrenica’ in the past ten days or so. As he put it, he couldn’t ‘understand how somebody could bring 3,000 Turks of military age and put them in schools all over the municipality’, in a situation when 7,000 troops from the BH Army’s 28th Division, were still present in the woods around the town. They had pulled out of Srebrenica. There was a real risk that Zvornik might be occupied.

This report, Pandurevic noted on the seventh day of his evidence in his own defense, is the ‘only official document speaking, in a rather euphemistic manner, about what was going on with the executions of prisoners of war’. As Pandurevic put it today, he wanted to have a paper trail.

Pandurevic knew that the prisoners were brought to the Zvornik area on the orders of Ratko Mladic, commander of the Main Staff, and they were in fact ‘prisoners of the Main Staff’. They came in convoys organized by the military security; those in charge of organizing the convoys ‘acted on the authority of General Mladic’. The prisoners were detained in civilian buildings and were not in the jurisdiction of the Zvornik Brigade. The information that was given out was that they would be exchanged after a ‘triage’. According to Pandurevic, the executions ‘started suddenly’.

Pandurevic claims he had no information about the Zvornik Brigade receiving any orders from the Drina Corps about the executions. As far as he knew, no personnel from his brigade took part in the executions. Dragan Obrenovic, chief of staff, did dispatch five or six military police to help security chief Drago Nikolic with the ‘triage’. Pandurevic knew that members of the 10th Sabotage Detachment, some men from Bratunac and other persons he didn’t know took part in the executions. Pandurevic was also aware that the machinery from the Zvornik Brigade and municipal services was used to bury the victims at the request of the military security.

Pandurevic believes his report of 18 July 1995 was ‘explicit enough’ for General Radislav Krstic, Drina Corps commander, to ‘be able to tell what [Pandurevic] meant’ when he protested against ‘3,000 Turks of military age in the school buildings’ in Zvornik municipality; it was Krstic’s duty to report this to the competent prosecutor’s office and court. It is true, Pandurevic admitted, that he could have tasked the military security officers to investigate the matter. Today however Pandurevic made it clear that it would have been illusory for the security officer in the Zvornik Brigade to order an investigation into the crimes committed by security officers from the superior units: the Drina Corps and the Main Staff.