Responding to accusations levied by Drago Nikolic’s defense counsel, Vinko Pandurevic says he ‘learned afterwards’ that ‘the Zvornik Brigade security service’ participated in the operation to arrest, execute and bury Bosniaks detained after the fall of Srebrenica in the summer of 1995. Pandurevic is continuing testimony in his own defense 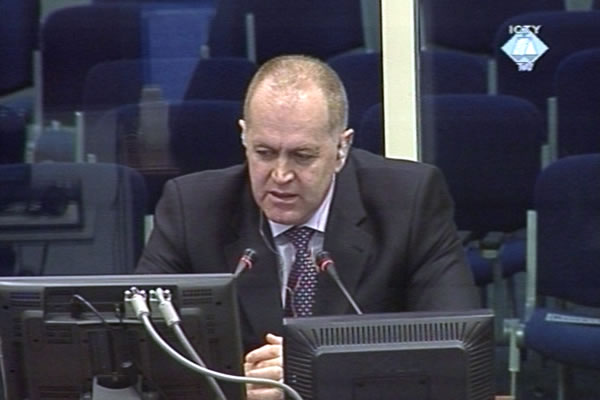 Vinko Pandurević u sudnici Tribunala
Drago Nikolic's defense counsel continued his cross-examination of Vinko Pandurevic, levying new accusations against the former commander of the VRS Zvornik Brigade. At that time, in 1995, his client was chief of security in the Zvornik Brigade and Pandurevic was his superior officer.

Canadian lawyer Stephan Bourgon argues that Pandurevic had learned from his deputy, chief of staff in the Zvornik Brigade, Dragan Obrenovic of the detention and execution of Bosniaks captured after the fall of Srebrenica on 15 July 1995 and not on 16 July 1995 as Pandurevic had contended on his evidence. According to Bourgon, Pandurevic didn’t forward this information to anybody, made no effort to learn more and failed to make sure that such incidents didn’t reoccur.

Pandurevic rejected the accusations sticking to his statement that he had learned about the executions of prisoners who were first detained in several schools in the Zvornik area, from Obrenovic on 15 July 1995, not 16 July. Pandurevic immediately ordered Obrenovic to go to the brigade command to gather additional information on this.

When Nikolic’s defense counsel attacked him for deliberately keeping the information about the prisoners to himself, Pandurevic repeated that as far as he knew the whole operation to detain, execute and bury the captured Bosniaks was run ‘from the top of the VRS’ and implemented by the security service. Pandurevic added that he ‘found out later’ that the Zvornik brigade security – Drago Nikolic was its chief – had taken part in it.

The defense counsel was not interested in Pandurevic’s ‘subsequent knowledge’: it had nothing to do with his question why Pandurevic failed to inform the Corps command or the Main Staff about what he had learned regarding the prisoners. ‘It was necessary to stop a while, to hold the ball before forwarding the report on that’, Pandurevic said, explaining why he didn’t forward his information to the VRS Drina Corps command before 18 July 1995.

Nikolic’s defense maintains that Pandurevic believed the column of the BH Army 28th Division troops heading towards Tuzla after the fall of Srebrenica on 15 July 1995 posed a significant threat to both the Zvornik Brigade and the town of Zvornik; this is contrary to what Pandurevic said in his examination-in chief. Therefore, the defense argues, Pandurevic decided to let it pass. Pandurevic remained adamant that he had let the column pass to ‘save lives’; the ‘column was already in chaos’ and his task to ‘stop and neutralize it’ had already been accomplished.

Drago Nikolic’s defense is expected to complete the cross-examination tomorrow.