NONE OF VINKO PANDUREVIC’S BUSINESS

The operation to move the bodies from Srebrenica mass graves was conducted in September 1995 in ‘great secrecy, through the security chain of command , with the authorization of Ratko Mladic’, as far as Vinko Pandurevic knows. The Zvornik Brigade commander concluded ‘it is better that I don’t interfere in something that is not my business’ 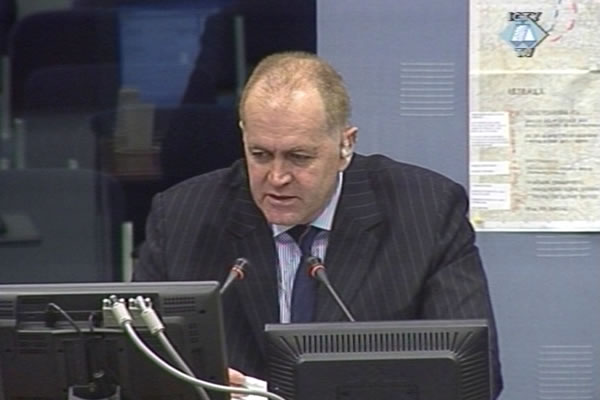 Vinko Pandurević u sudnici Tribunala
As he continued his testimony in his own defense, Vinko Pandurevic recounted how he had learned about the operation to dig up the Srebrenica mass graves on his return from the western BH front. He was there from 3 August to 25 September 1995. One of the officers told him that ‘in the course of five or six days’ in September, a number of trucks passed through Zvornik; ‘there was unbearable stench coming off the trucks’, the officer went on to say, adding that ‘they most probably transported bodies’.

Pandurevic’s deputy Dragan Obrenovic who was in charge of the Zvornik Brigade confirmed this. He told Pandurevic that ‘Mladic personally authorized the fuel for the transfer of bodies done by the Drina Corps engineers battalion’. According to Obrenovic, the Zvornik Brigade ‘didn’t receive any tasks in relation to this’. Pandurevic claims he had no direct information, but he concluded the operation ‘was organized by the security service’ because the commands did not receive any tasks of the sort. When the defense counsel asked him if he had contemplated conducting some kind of an investigation, Pandurevic replied that he could do nothing, because the transfer operation was ‘much more clandestine than the July one’ when thousands of prisoners of war were killed. He decided it ‘is better for me to stay out of it’. ‘Somebody was doing something that was not my business’, Pandurevic explained today.

After the Dayton peace accords were signed, in December 1995 conflicts inside the Bosnian Serb political and military leadership resulted in Pandurevic’s rapid rise in the VRS ranks. Pandurevic nevertheless decided to enroll in the National Defense School in Belgrade and to continue his career in the VJ. The news that he had been indicted reached him in December 2001; he was the chief of the Center for Military Strategy and Research. Peter McCloskey, lead prosecutor in this case, told him that in person.

Two months earlier, in October 2001, Pandurevic was persuaded by General Zivanovic, former Drina Corps commander, to meet with the OTP investigator Eileen Gilleec; she was a member of the team investigating the crimes against Serbs in the Srebrenica area. They met in a café, Peti puk, and spent five hours eating, drinking and discussing the sufferings of Serbs in Podrinje, the events in Srebrenica in July 1995 and Pandurevic’s criticism of the report drafted by Richard Butler, OTP’s military analyst. The conversation was interpreted by Vesna from Belgrade who, according to Pandurevic, was not very familiar with ‘military terminology’. Gilleec wrote down notes into her notebook from time to time.

Back in The Hague, the investigator drafted a report based on those notes and submitted it to the team in charge investigating the Srebrenica crimes. Pandurevic’s defense counsel today quoted with unrestrained glee parts from that report and then asked the accused if it was possible that he had said something like that.

In most cases, this was obvious and total nonsense which Pandurevic explained as interpreting errors and ‘misunderstanding and lack of interest on the part of the investigator’

In December 2001, prosecutor McCloskey told Pandurevic over the phone that he was ‘in trouble’, which meant that he had been indicted. Pandurevic’s evidence continues tomorrow.