In the cross-examination of Mustafa Dragaj, Albanian from Kosovo who survived the execution in Izbica on 28 March 1999, the Vlastimir Djordjevic’s defense has implied that among more than a hundred people who were killed there was a significant number of ‘young men’, 50 to 65 years of age and those older than 65 may have been fit for military service… ‘if they wanted to be’ 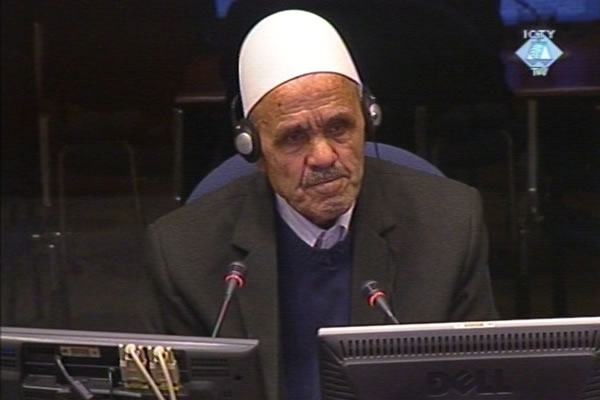 Mustafa Dragaj, svjedok na suđenju Vlastimiru Đorđeviću
Izbica is one of eleven mass murders sites in Kosovo listed in the indictment against the Serbian police general Vlastimir Djordjevic. On 28 March 1999, at least 116 Albanian civilians, most of them elderly men, were killed there. A handful of Kosovo Albanians who managed to survive the execution have already testified about the massacre at the trials of Slobodan Milosevic and the Kosovo Six; they were lined up to be shot, but survived. Mustafa Dragaj recounted today for the third time what he had been through in Izbica.

The events began on 25 March 1999, when the Serbian forces launched artillery attacks against the village of Leocina, where he lived, and the surrounding villages. The shelling didn’t stop the next day, and most villagers fled towards Izbica. As Dragaj recounted, in Izbica ‘there were no Serbs and the mountains were nearby’. There was not enough space for everybody to stay in the village houses, and several thousand people gathered in a meadow near the village. However, a few days later, on 28 March 1999, the Albanians refugees were surrounded by the army and the police. Women and children were separated from men, most of whom were elderly.

As Dragaj recounted, most men from his group were stripped of their valuables; then they were divided into two groups. One group, Dragaj said, was ordered to go west, and the other east. He was in the ‘eastern’ group; they were soon told to stop and fire was opened at them. The witness was not hit but he fell to the ground, hiding behind a dead body. He lay still for about 20 or 30 minutes, until he thought it was safe to move. He crawled into forest and hid there until the soldiers and police withdrew. The witness soon learned that the men from the ‘western’ group had also been shot to death. On 31 March 1999, the witness, a handful of survivors and other Albanians from the area – some of them KLA members – buried the victims’ bodies. The witness said that he counted 147 graves.

Like Slobodan Milosevic and other Serbian officials charged with Kosovo crimes, Vlastimir Djordjevic’s defense counsel in his cross-examination tried to prove that the Albanians killed in Izbica were, or at least could have been, members of the KLA. The defense counsel implied that, contrary to what the witness was saying, most of the victims were fit for military service.

The defense counsel first said that men above the age of 65 were not fit for military service, and then proceeded to present interesting statistics. Veljko Djurdjic calculated that the list of victims from Izbica contained 20 persons under 50 and 38 persons under 65; the age of eleven victims is undetermined, which meant that 42 victims were older than 65. ‘Well, aren’t they all young men’, the defense counsel asked prompting the witness to tell him that because of their advanced age they believed they would not be killed. Younger men had sought shelter in the forest, the witness added. The defense counsel however went further, implying that men older than 65 - there were a dozen men over 80 years of age, while the oldest victim was 93 – could have been ‘fit for military service’, ‘if they wanted to be’. ‘There is a right time for everything, a soldier has to be young and not old’, Mustafa Dragaj briefly retorted.