Serbian police officer has given evidence on the massacre in Suva Reka on Kosovo on 26 March 1999 when 44 members of the Berisha family were killed. The witness claims his colleagues from the Suva Reka SUP committed the crime. They put the victims in a pizzeria, dropped a hand grenade inside and kept firing at those who were still alive ‘until no more screams were heard’ 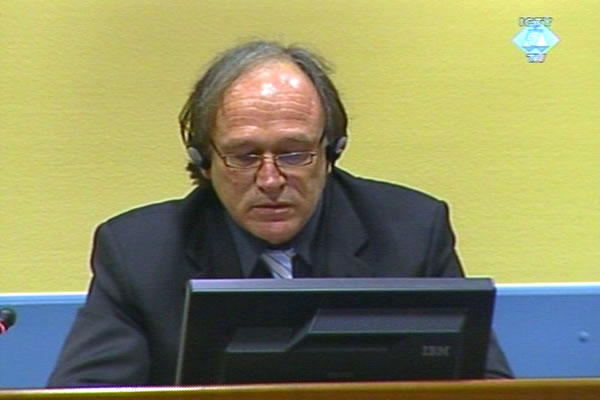 Vlastimir Đorđević u sudnici Tribunala
According to the indictment against Vlastimir Djordjevic, former chief of the Serbian MUP Public Security Department, on 26 March 1999 44 members of the Berisha family were killed in the Kosovo municipality of Suva Reka. A reserve policeman from the local SUP who was among those who committed the crime gave evidence at Djordjevic’s trial with protective measures. He testified with image and voice distortion and under the pseudonym K83.

The operation was launched in the morning; two military trucks with police officers sent as support to the local police troops arrived in the village. The reinforcements were led by Radoslav Mitrovic Ceger, who commanded the Nis detachment of the Special Police Units (PJP). Ceger ordered the witness and his three colleagues – Miroslav Petkovic, Sladjan Cukaric and Radovan Tanovic – to join the special troops.

When the men were separated from the women and children, the witness recounted, Cukaric and Tanovic lined up and killed four unarmed men. Cukaric personally killed two elderly men who were lying wounded in the street. The witness said that his task was to escort a group of forty remaining members of the Berisha family to a nearby pizzeria.

As the witness put it, ‘everything happened quickly’. He was ‘scared and could not calm down’ and his colleague Cukaric told him to ‘take some alcohol and relax’. At the trial of former Serbian political, military and police officials where he gave evidence in 2006 the witness said that four of them drank ‘two bottles of brandy and vodka’. Tanovic then broke a pizzeria window with his rifle and threw a hand grenade inside. There was ‘wailing, screaming and crying’ from inside and Cukaric ‘kept firing at the window until no screams were heard’.

The victims’ bodies were then loaded onto military trucks and taken towards Prizren. Remains of the Berisha family members were found on two locations, at the police firing range in the Prizren municipality and in the mass grave at the SAJ training area in Batajnica near Belgrade. General Djordjevic is accused of being in charge of the cover-up of Kosovo crimes by transferring the bodies of Albanians victims to Serbia.

Before the police officer from Suva Reka took the stand, Veton Surroi, politician and publisher from Kosovo, completed his evidence. In his cross-examination, General Djordjevic’s defense counsel put to him the well-known Serbian version of causes, developments and consequences of the Kosovo crisis. The witness didn’t agree with him.

The trial of General Djordjevic will continue on Monday with the cross-examination of the insider witness, Serbian MUP member who was accomplice in the Suva Reka massacre.