Shyhrete Berisha, one of three survivors of the massacre in which more than 40 Albanian women, children and men were killed in Suva Reka, has described for the third time before the Tribunal how she lost her husband, four children and some 40 members of her family in an attack by Serbian police 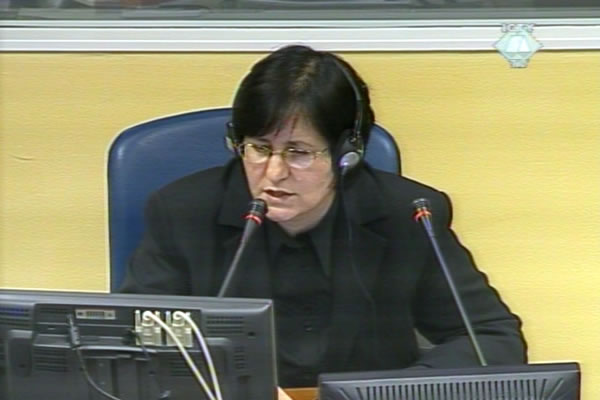 Shyhrete Berisha, svjedok na suđenju Vlastimiru Đorđeviću
The trial of police general Vlastimir Djordjevic continued today with the evidence of one of the three survivors of the massacre in which some 40 members of the Berisha family were killed on 26 March 1999 in Suva Reka. Shyhrete Berisha lost her husband and four children that day. She miraculously survived the massacre, despite multiple wounds inflicted by bullets and hand grenades.

The witness described how the Berisha family property was surrounded on the day of the massacre by armed men in uniforms who had ran out of the police station nearby. One of them, whom she knew as Zoran, called everybody to leave the house in Albanian; he was swearing at them and telling them to ‘call their American friends now to help them’. In the chaos that ensued, six men were killed in the yard, including the witness’s husband Nexhat. She, her four children and many other family members then fled the place.

They stopped not far from their house and were forced to go into a pizzeria. The group numbered about 40 women and children, including the witness’s daughters, Herolinda, 14, and Majlinda, 16, and sons, Altin who was 11 and baby Radon who was two months old. As soon as they were forced into a pizzeria, fire was opened on them and then two hand grenades were thrown in.

The witness lay in a pool of blood, wounded to her leg, chest and abdomen. She was not the only survivor: her son Altin was also showing signs of life, but when the policemen saw that he was still alive, they shot him. They fired the coup de grace at her too, when they saw she was still alive, but the bullet hit her hand. She lost consciousness and the killers thought she was dead. Soon after the massacre, all the bodies were loaded onto a truck and taken towards Prizren. Two other survivors were in the truck together with the witness: a woman and a boy. They all jumped off the truck along the road. Local Albanians treated their wounds and then they were transferred to Albania.

In his cross-examination, Djordjevic’s defense counsel didn’t deny the crime, but tried to prove that the witness and her relatives were not victims of police officers, at least not of the ‘regular’ policemen who belonged to the Public Security Department, headed by the accused. The defense counsel insisted that Shyhrete Berisha could not have recognized local policeman Zoran Petkovic ‘by voice’ because she had never talked to him. She didn’t see the uniforms of the attackers either, he claimed. The witness admitted she did not know Zoran personally, but she knew ‘very well’ who he was. She didn’t want to discuss the uniforms at all, saying that those who committed the crime against her family were ‘uniformed and armed with automatic rifles’.

This is the third time Shyhrete Berisha has given evidence before the Tribunal. She has already testified at the trial of former Serbian president Slobodan Milosevic and that of his successor, Milan Milutinovic. Milutinovic and five other former Serbian officials are awaiting judgment for Kosovo crimes.