Former crime scene technician from Kladovo Bosko Radojkovic has described his role in the discovery of the refrigerator truck in April 1999 in the river Danube. The defense then tried to prove that the witness and police officers from Kladovo had acted alone when they tried to hide the bodies they had found in the truck The regular procedure was followed only when the accused Vlastimir Djordjevic got on the case 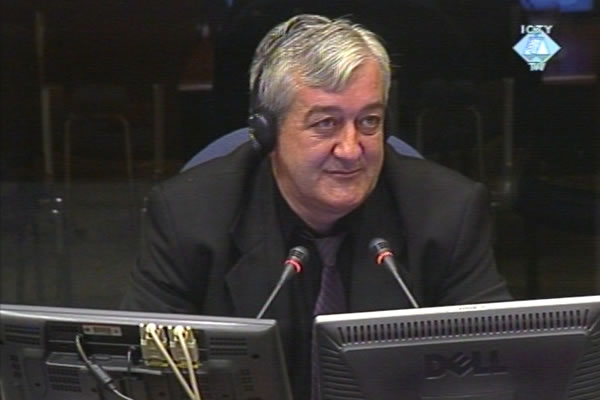 Boško Radojković, svjedok na suđenju Vlastimiru Đorđeviću
In his evidence, former chief of the Bor SUP Caslav Golubovic described how he had been ordered by the accused MUP general Vlastimir Djordjevic to organize the transfer of the remains of Kosovo Albanians from Kladovo to Batajnica. The next prosecution witness was the first person to see the refrigerator truck containing the bodies. Testifying before the Tribunal for the third time, former crime scene technician from Kladovo Bosko Radojevic recounted what happened after he saw the vehicle on 5 April 1999 when it surfaced in the river Danube near Tekija in Eastern Serbia. The witness took part in the operation to pull the truck out; he was the first to open the door and see the bodies. Two days later, Radojevic took part in the unloading of the bodies from the refrigerator truck and transferring them onto trucks which then took them to Batajnica. There the bodies were buried in mass graves in the police training area.

As Radojkovic recounted, 83 bodies, three human heads and some other body parts were removed from the refrigerator truck. Among the bodies there were about a dozen females and two dead children, a boy and a girl. Male bodies were all in civilian clothes, the witness remembered. While the truck was being pulled out, Radojkovic took a series of photos that were shown today in the courtroom. The photos clearly show that the vehicle was owned by the PIK Progress, an abattoir from the town of Prizren in Kosovo. Radojkovic was then ordered by Caslav Golubovic to destroy the refrigerator truck; he drove it to the police training area in Petrovo Selo, poured gasoline over it and set in on fire on 7 April 1999. However, the frame of the truck remained whole and Radojkovic returned there next day and blew it up using explosives. In his evidence, Golubovic claimed that General Djordjevic had ordered him to destroy the refrigerator truck.

In the cross-examination, the defense tried to prove that once Djordjevic was told about the case on 6 April 1999, the removal of the bodies from the truck proceeded in accordance with the regular procedure; any attempts at ‘cover-up’ could only precede that time. If there were any such attempts, then Radojkovic and his colleagues from Kladovo were responsible, the defense argued. The defense counsel went on to ask the witness why he had shoved the feet sticking out of the back of the truck inside and fixed the doors with pieces of sheet metal. This was done in an effort to hide them from civilians who were pulling the truck out of the river, the witness replied. ‘I did that and nobody has held me responsible for it, Radojkovic said.

The witness confirmed that on 6 April 1999 he, the chief of the Kladovo OUP and several other local police officers decided to ‘cover up the bodies’ as neither the municipal nor district public prosecutors wanted to get involved. The witness then agreed with the defense counsel that in the morning of 7 April 1999, when General Djordjevic joined the removal operation, the bodies were neatly wrapped in blankets and prepared for autopsy. Radojkovic was not able to tell if the autopsies were actually conducted. The last thing the witness learned about the bodies was that they were taken towards Donji Milanovac. In the cross-examination, the witness was not asked whether the destruction of the refrigerator truck, ordered by Djordjevic and done by Radojkovic, had also been part of the regular police procedure.