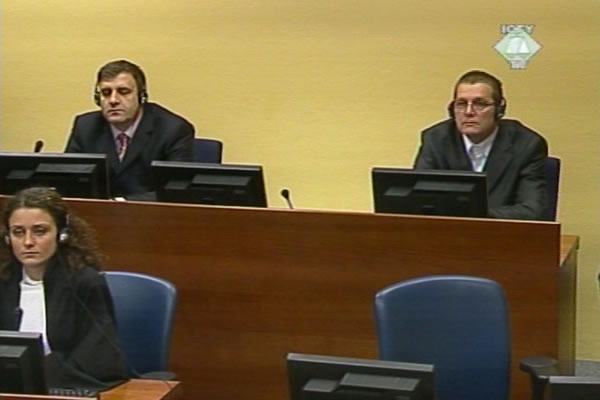 Milan and Sredoje Lukic in the courtroom
Protected witness VG-32 is one of the two survivors from a group of seven Bosniaks executed, as alleged by the indictment, by the accused Milan Lukic and his accomplices on 7 June 1992 on the Drina river bank near Visegrad. The trial of Milan and Sredoje Lukic opened in July 2008 with the testimony of witness VG-14 who spoke about this event.

After a few weeks in Gorazde, the witness returned to Visegrad in early May 1992 because he had a work obligation in the local health care center. The witness moved to the house of his father-in-law; it was located near his workplace to avoid having to pass through numerous check points all over town. The situation was getting risky: 'Muslims were disappearing every day', he said.

In the afternoon of 7 June 1992, Milan Lukic and several armed men came to the house of his father-in-law. They took the witness and his friend to a nearby house where a number of captured Muslims – including a boy – were detained. After he took all of their valuables, Milan ordered four of them to come with him. A car with three other prisoners was waiting outside the house. They all drove to the Vilina Vlas hotel, where they were joined by Mitar Vasiljevic. Vasiljevic, Milan Lukic's best man, is currently serving a 15-year sentence for his part in this crime.

They left the hotel and headed towards the Drina River. When they got close to the river bank, Milan lined them up facing the water and ordered his companions to open fire at the prisoners. 'I felt a flicker of hope', VG-32 said describing the moments when he jumped in the river before he was hit and a body of another victim fell on top of him. When he heard the attackers leaving, VG-32 realized that another man had survived the execution without injuries. The two of them remained in the water for some time and then took shelter in the bushes. When the night fell, they swam across the river 'holding to a tree stump'.

VG-32 also gave evidence about his encounter with witness VG-114 several days after she managed to escape from the house set on fire in the Bikavac neighborhood. Milan and Sredoje Lukic are also indicted for this crime. The state VG-114 was in when they met ‘went beyond the worst horror movie’, he said. Her face was burned beyond recognition and the wounds in her hands were 'full of maggots'. In its opening statement the prosecution indicated that witness VG-114 would be testifying without protective measures. VG-114 wanted to describe how it felt 'to be burned alive' and to look Milan Lukic, her schoolmate, 'who did this to her' in the eye as she told her tale.

In the cross-examination, Milan Lukic's defense counsel continued with his mistaken identity strategy: he claims the witness mistakenly identified the accused because he didn’t know him personally. According to the defense counsel, the information the witness had about the accused were based on rumors. The witness rejected this argument saying that the person sitting in the courtroom was Milan Lukic who took him to the execution site on 7 June 1992 and 'whose smile he remembered very well'.