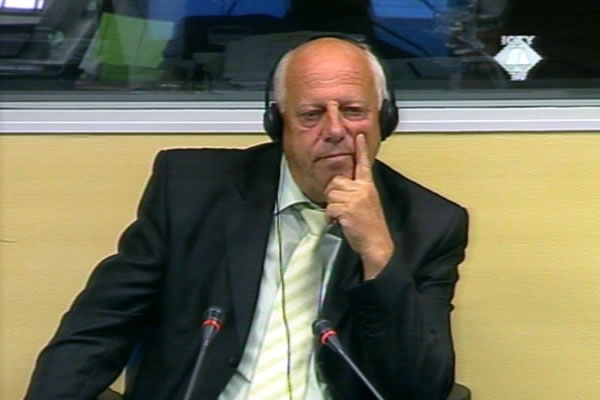 Huso Kurspahic, witness in the Milan and Sredoje Lukic trial
Huso Kurspahic, former police officer from Visegrad, lost his mother, two sisters and almost fifty other relatives who were burned alive in the Pionirska Street. According to the indictment, Milan and Sredoje Lukic took some seventy Bosniaks from the village of Koritnik – including a newborn baby – to a house, shut them in and set the house on fire. Kurspahic’s evidence is based on the information he got from his deceased father, one of few who managed to escape from the burning house. As Kurspahic said, his father left him the truth about the event as his legacy.

Kurspahic first testified about the crime in 2001 at the trial of Mitar Vasiljevic, who was acquitted on that count, but was sentenced to 15 years for other crimes. Today at the trial of Milan and Sredoje Lukic the prosecutor tendered into evidence the transcript of Kurspahic’s evidence in the Vasiljevic case. In 2001, Kurspahic was granted full protective measures. This time, Kurspahic said, he decided to testify in public and to see the accused Sredoje Lukic face to face. The two of them had worked together in the Visegrad police for ten years.

Kurspahic also testified about the disappearance of his younger brother. He knows that in early May 1992 his brother was taken to the police station and was later taken to the Uzamnica barracks where he was ‘killed by Milan Lukic’, as far as the witness knows. Repeated abuse of Bosniaks detained in the barracks is among the charges against Milan and Sredoje Lukic.

In the cross-examination, Milan Lukic’s defense counsel insisted that the witness didn’t have ‘first-hand’ information and had changed his statement as time went by. Sredoje Lukic’s counsel denied his client was ‘anywhere near the terrible crime’ in the Pionirska Street, offering his condolences to Kurspahic. The defense counsel went on to ask the witness if he could even suspect a colleague he ‘had known for such a long time’ could commit such a crime against his family. Sredoje would be able to do it, the witness said.

The second witness who gave evidence today, VG-038, had managed to jump through a window of the burning house in the Pionirska Street on 14 June 1992. Most of the seventy-odd Bosniaks locked inside burned to death. The witness was only thirteen at the time. The transcript of his evidence at the trial of Mitar Vasiljevic was also admitted into evidence. Most of his testimony today was given in closed session.