WITNESS: ‘THEY KILLED PEOPLE WITH DELIGHT’

At the trial of Milan and Sredoje Lukic, protected witnesses VG-14 and VG-79 described the execution of a group of Muslim men on the bank of the Drina river on 7 June 1992. 'I had a feeling that they enjoyed it, killing people with delight', a witness who survived the execution noted 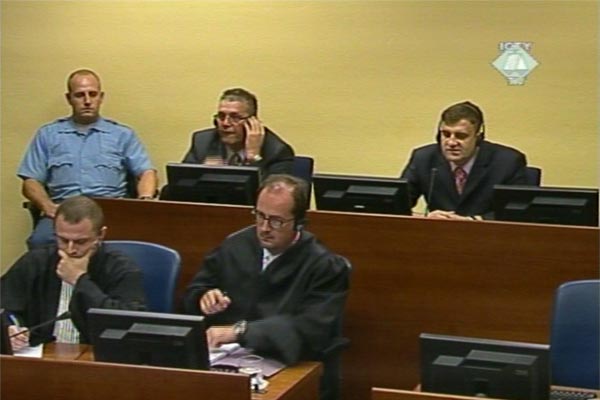 Milan i Sredoje Lukic in the courtroom
Protected witness VG-14 is one of the two survivors of the execution of seven Bosniaks that Milan Lukic and three other paramilitaries from his unit carried out, according to the indictment, on 7 June 1992 on the bank of the Drina river bank near Visegrad. His moving testimony about how he survived the shooting was confirmed by the testimony of another prosecution witness, VG-79, who observed the execution through binoculars from the other side of the river.

In the afternoon on 7 June, the witness recounted, Milan Lukic and his escort – 'in navy blue uniforms, with white Chetnik insignia and with their faces painted' – took him and his relative from their family house. The witness recognized Milan because, as he explained, they had attended secondary school together. One street down they were joined by another car with five captured Muslims inside. They drove to the Vilina Vlas hotel where Mitar Vasiljevic, Milan Lukic's best man, joined them. Vasiljevic is currently serving a 15-year sentence for role in that crime.

When they left hotel, they headed out of the town stopping at a deserted house near the Drina River. When they got close to the river bank, Milan ordered them to line up facing the river. He ordered his escorts to open fire on the prisoners. 'I felt the end was here’, the witness said as he described how 'his whole youth unfolded in his head' as he looked at his home village on the other bank. 'I felt as if they enjoyed it, killing with delight', the witness added. When shots were fired at the Muslims, he fell into the water and a victim’s dead body fell on top of him. Although the executioners fired some more shots at him, he was again not hit. Soon he saw that another man had survived the execution. When they were sure Lukic and his men had left the river bank, they got out of the water and swam across, holding on to a tree stump.

The second witness recounted today how he and his relative happened to be on the other side of the Drina and how they watched the execution through binoculars from some 500 meters away. He confirmed the evidence given by VG-14, describing how he was there to pick up the survivors when they reached the other bank.

In his cross-examination of both witnesses, Jason Alarid, Milan Lukic's defense counsel, didn't contest the incident itself, but he did try to prove it was a case of mistaken identity; according to him, Milan Lukic was not present at the crime scene at all. In his effort to point to the discrepancies in the statements about the color of the uniforms and the appearance of the cars in which the prisoners were taken to the river bank, Alarid told the presiding judge that his aim was to challenge the 'authenticity and credibility' of the witnesses and their evidence.

After the opening statement and the evidence of first two witnesses, the trial of Milan and Sredoje Lukic will continue on 20 August 2008 after the Tribunal's summer recess.

The prosecution has charged Milan and Sredoje Lukic with persecution, cruel treatment and murder in the Visegrad area from June 1992 to October 1994. The indictment alleges that they are individually or jointly responsible for the burning of about 140 Bosniak women, children and elderly in two houses in Visegrad and a number of murders of civilians.