Prosecution witness Hamdija Vilic claims he has been offered € 100,000 by Milan Lukic’s defense to secure an alibi for Milan Lukic for a crime in the Pionirska Street in Visegrad by giving false evidence. Seventy women, children and elderly people were burned alive in the incident. The prosecution has rested its case 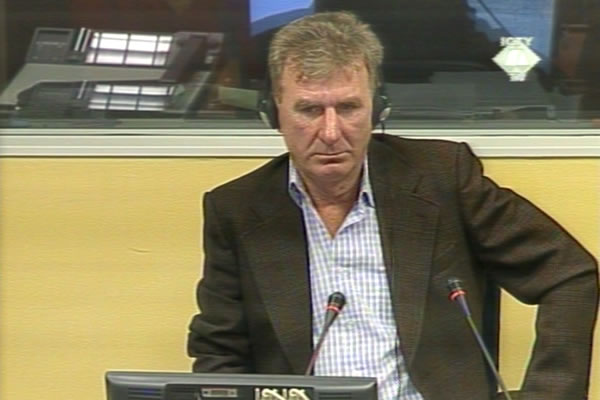 Hamdija Vilic, witness in the Milan and Sredoje Lukic trial
The last prosecution witness Hamdija Vilic claims that Milan Lukic’s defense offered him €100,000 five months ago to give false evidence and confirm Lukic’s alibi. Milan Lukic is charged with the living pyre incident in the Pionirska Street in Visegrad, as alleged in the indictment, when he and Sredoje Lukic set some 70 Muslims on fire in a house on 14 June 1992.

As Vilic recounted, in early June 2008 he was approached by some men who introduced themselves as the middlemen representing Milan Lukic’s defense team. They asked him if he would be prepared to give an official statement to the defense. Vilic accepted their offer as he ‘wanted to see’ what Lukic, who had ‘destroyed his life and family’, wanted from him. Later, the witness contends, the accused called him two times from the UN Detention Unit. On 22 June 2008 Vilic met Lukic’s middlemen and lawyers in Zavidovici; they offered him a prepared statement to sign. The statement said that Vilic, as a BH Army unit commander, kept Milan Lukic besiegd from 13 to 15 June 1995. Hamdija Vilic recounted how he was promised the accused would get him ‘everything he needs in life’, including €100,000 if he confirmed the claims in the statement in court.

The witness also said that Milan Lukic promised him over the phone that he would ‘learn the truth’ about the fate of his family if he came to The Hague and testified in his favor. The names of Vilic’s wife and three little children are listed in the indictment against Lukic among the victims burned alive in the Bikavac neighborhood on 27 June 1992. During the conversation with the middlemen, Vilic learned that they had already paid €5,000 to a mutual acquaintance, a Muslim, to confirm Lukic’s alibi as a defense witness.

In Vilic’s words, when he realized he had to ‘say something that was not true’ and ‘sell his family for money’, he declined the offer. He got in touch with the prosecution some days later, after he had ‘a chance encounter in a bar’ with a relative of a witness who put him in touch with the OTP investigators.

Defense counsel of Milan Lukic, American lawyer Jason Alarid, didn’t even bother denying that Vilic had been contacted. In his cross-examination, Alarid accused Vilic of ‘asking for money himself’. The witness denied this, saying he was offered the money. Noting that the witness was a member of the BH Army involved in the murder of a Serb civilian, Alarid attempted to discredit him claiming that Vilic was ‘ready to kill’. In his examination-in chief, Vilic confirmed that in 1996 he was sentenced to five years in prison for murder. In his reply to the defense counsel, Vilic said that he didn’t hide the fact that he had killed a man in self-defense and that he ‘did his time’ for that; the witness also said that he didn’t conceal the fact that he was ‘a regular soldier’ of the BH Army.

The trial of Milan and Sredoje Lukic continues tomorrow with a 98 bis rule hearing. At that hearing, the defense counsel can call for the acquittal of their clients on the counts in the indictment they consider the prosecution has failed to prove.