Zehra Turjacanin, the only survivor from the burning house in Bikavac, Visegrad, testified today at the trial of Milan and Sredoje Lukic. The house was set on fire on 27 June 1992; there were some 70 Bosniaks inside. She described ‘what it felt like to burn alive’. She concluded her poignant testimony about the living pyre in Bikavac – several members of her family were burned to death and she herself was severely burned in the house – by saying, ‘I’m alive, life is beautiful and I want to keep on living my life to the full’ 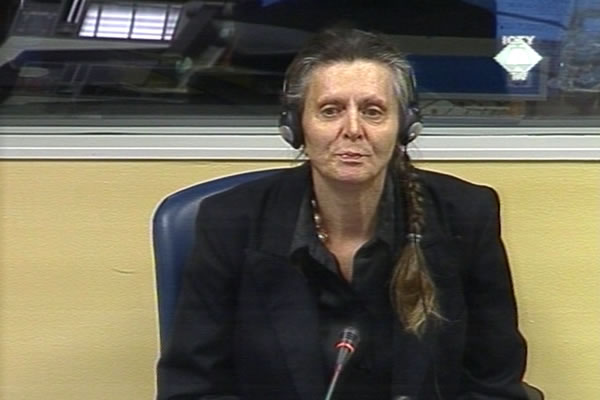 Zehra Turjacanin, witness in the Milan and Sredoje Lukic case
‘I must live’, Zehra Turjacanin said when she was told that ‘others need the drugs more’ than she did because she could die any moment from severe burns she sustained in the house in the Bikavac neighborhood in Visegrad. The house was set on fire on 27 June 1992 by Milan Lukic and members of his White Eagles unit. Sixteen years later, Turjacanin came to The Hague to recount in her testimony at the trial of Milan and Sredoje Lukic ‘what it feels like to burn alive’.

‘When you pour petrol on a body and set it on fire, it burns’, the witness said as she described the murder of two Bosniaks in Visegrad in June 1992. At night, she would watch from her balcony Bosniak men being killed on the Visegrad bridge; their bodies were thrown in the Drina River. ‘The atmosphere was strange, there were rumors about things that were going on, fear reigned’, she said.

In the evening of 27 June 1992 Milan Lukic pulled up in front of her house in the Bikavac neighborhood in a car together with a group of soldiers, Serb ‘nationalistic’ music blaring from the car stereo. The witness was in her house with her mother, two sisters, a sister-in-law with her children; her neighbor and her small daughter were also there. Lukic and his men first took everybody outside of the house. Saying that they ‘organized a convoy for Bajina Basta’, they took them to the house of Meho Aljic.

Despite the fact that she was not able to identify Milan Lukic in the court, the witness was adamant that it was him who barged into her house in Bikavac with his White Eagles. She knew him very well because they attended the same school and saw each other often during the breaks, the witness contends. Her brother, she said, had sat next to Milan Lukic at the same desk in class. She remembered how Milan Lukic approached her when they took them into Aljic’s house and tore her golden chain from her neck.

‘There were many children in that house, it’s so sad’, the witness said adding that the youngest child there was less than one year old. Most of the people were younger women with children, and there were some elderly men and women too. The Serb soldiers first threw stones at windows to break them, and then lobbed hand grenades. For a while, they fired shots at the crowd inside the house and they set the house on fire. ‘People were burned alive, everybody was crying out; I simply can’t describe what I heard then’, the witness said.

When the fire caught her clothes the witness and one of her sisters managed to get to the door, but it was blocked: a heavy iron garage door had been placed against it from the outside. However, she was able to somehow pull herself out through a small opening in the door; her sister remained inside. As she ran towards the houses in the Mejdan neighborhood, the witness saw Serb soldiers lying in the grass and drinking.

Despite severe burns on her face and hands, the witness returned to Bikavac after a while, and went from house to house to warn people what could happen to them. She stayed in the last house she visited. Next morning, she went to the Serbian army headquarters; in desperation she asked to be executed. No one offered any help. Eleven days later a Serb soldier warned her to flee because Milan Lukic knew where she was and was planning to finish her off.

After the warning the witness and the remaining Muslims from Visegrad left on foot and went to Medjedja. She survived, although the doctors said she was ‘at death’s door and medicating her would be to waste drugs’. Her burns were so severe and badly infected that her best friend’s husband was not able to recognize her in Medjedja although he knew the witness very well. The man also testified in this case under the pseudonym VG-32.

‘I am alive. Life is beautiful and I want to live it to the full’, Zehra Turjacanin concluded her evidence at the trial of Milan and Sredoje Lukic. She testified in French. She has spent years in treatment in France, her ‘new homeland’, where she is trying to forget what happened to her in Bikavac in 1992.