HARAQIJA AND MORINA PLEAD NOT GUILTY

Former Kosovo minister of culture and his associate plead not guilty to contempt of court. They are charged with trying to pressure a prosecution witness at the trial of Haradinaj, Balaj and Brahimaj. After they entered their plea the accused - who surrendered voluntarily to the Tribunal yesterday – were taken back to the UN Detention Unit 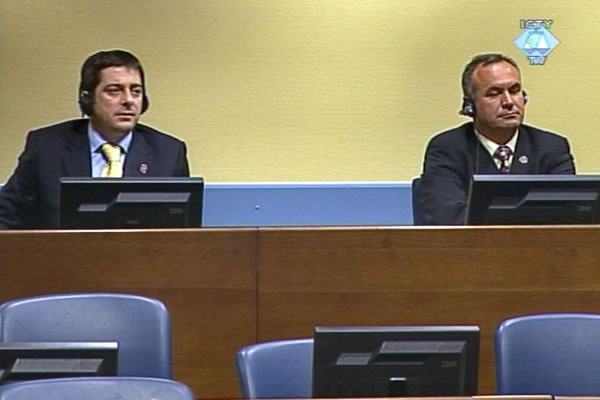 Astrit Haraqija and Bajrush Morina in the courtroom
One day after they surrendered to the Tribunal, Astrit Haraqija, former Kosovo minister of culture, youth and sport, and his associate Bajrush Morina pleaded not guilty to contempt of court charges. The indictment against them was issued on 8 January 2008.

As alleged in the indictment, Haraqija and Morina tried to pressure a protected prosecution witness not to testify at the trial of Ramush Haradinaj, Idriz Balaj and Lahi Brahimaj. As one of the founders of the Committee for the Defense of Ramush Haradinaj, Haraqija ordered Morina to travel to the country of residence of a protected witness in July 2007 and persuade him not to go to The Hague. The witness refused to bow to the pressure and gave evidence at the trial of the KLA leaders. However, chief prosecutor Serge Brammertz decided to charge the two Kosovo officials with contempt of court. The indictment was confirmed in February 2008 and was kept under seal until last Friday.

After they entered their plea, the accused were put in the Tribunal’s Detention Unit, on Judge Alphonsus Orie’s order. Haraqija’s defense counsel Corin Khan and Morina’s defense counsel Jans Dikman announced they would file motions for provisional release. The trial will be scheduled ’as soon as possible’. Prosecutor David Re told the Chamber that the prosecution objected to the provisional release of the accused because they ’are charged with serious violations’. The prosecution is ready to proceed to trial immediately, he said, noting that its case would be based on the evidence of ’four to five witnesses and the interviews of the accused’.

The accused Kosovo officials said they were well and had no health problems.
Earlier this month Ramush Haradinaj and Idriz Balaj were acquitted on all thirty seven counts in the indictment charging them with kidnapping, detention, torture and killing of Serbian, Albanian and Roma civilians. Lahi Brahimaj, the third accused in the case, was found guilty of two instances of cruel treatment and torture in the Jablanica camp and was sentenced to six years in prison.

The trial was burdened with constant problems with witnesses. In the statement of reasons in the judgment the Trial Chamber emphasized it was under ‘a strong impression that the trial proceeded in an atmosphere in which the witnesses did not feel safe’