WERE THE MUJAHIDEEN MERCENARIES OR PART OF THE BH ARMY

In the cross-examination of defense witness Paul Cornish, the prosecutor wanted the witness to corroborate the prosecution argument that the El Mujahid Detachment was part of the BH Army chain of command and control. Cornish teaches international security at the Royal Institute in London 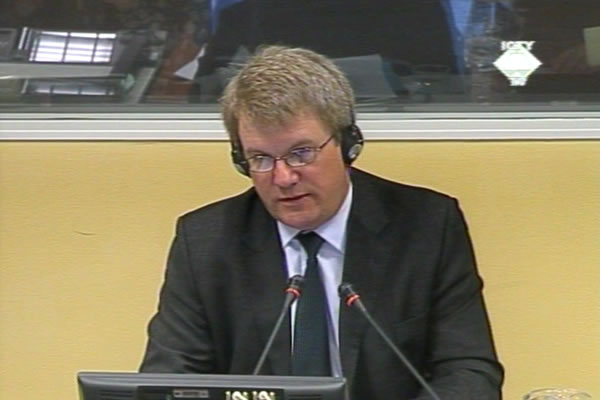 Paul Cornish, defense witness for Rasim Delic
In the cross-examination of British professor Paul Cornish, author of the expert report on command and control in modern warfare drafted for the defense, the prosecution tried to get him to confirm its argument that the El Mujahid Detachment was part of the BH Army chain of command and control. The accused general Rasim Delic commanded the Army.

According to Dr Cornish’s expert report, a unit that refuses to carry out orders of its superior command and doesn’t report to it, whose members wear their own uniforms and insignia, a unit that receives funds from its own sources, cannot be considered part of a unified chain of command. If such a unit consisted of foreign fighters who didn’t speak the local language, it would make communication difficult and create yet another problem. According to the expert witness, all this points to the conclusion that it was a mercenary paramilitary formation deployed in the same area by coincidence, whose objectives were the same or similar to those of the regular army.

Prosecutor Daryl Mundis asked Dr Cornish if he would change his opinion about the status of such a unit if he took into consideration the possibility that it was resubordinated to an army. The witness first said that his opinion would remain the same, because this would not mean that all the prerequisites for the command to exercise control over such a unit would exist. Supposing that the commander of this hypothetical model army issued an order to form a unit out of this group of soldiers, then, according to the witness, he must be convinced that it can be fully integrated into the chain of command.

When the judges asked him about the possible jurisdiction of the military police of an army if the paramilitary formation committed a crime, the witness replied that it would be a legal issue outside of his expertise. When it comes to the responsibility of the commander of the army in whose area of responsibility crimes were committed, the witness explained, the responsibility would depend on the degree of his command and control over such a formation: this is indeed the key issue in the case against the former commander of the BH Army General Staff.

The trial continues tomorrow with the additional evidence of protected witness PW-9, who testified for the prosecution. He is a former commander of the El Mujahid Detachment. The defense called this witness for additional cross-examination after the prosecution disclosed belatedly a series of documents the Italian government seized in the Islamic Cultural Center in Milan. Some of the documents are the reports of the El Mujahid Detachment that, according to the defense, ‘shed a new light’ on General Delic’s case.