NOT THE TIME FOR INVESTIGATIONS

In his cross-examination, General Delic’s defense witness denies it was his responsibility to investigate what happened to some fifty Serb soldiers that were, as he claims, kidnapped by unidentified Arabs on 10 September 1995. He was not able to investigate the incident because ‘there was gunfire everywhere’. According to the witness, his responsibility ended when he reported the incident to his superiors 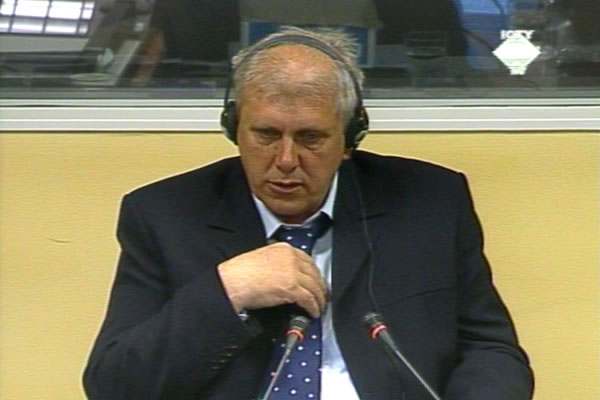 Izet Karahasanovic, defense witness for Rasim Delic
The prosecution continued its cross-examination of Izet Karahasanovic, security officer with the BH Army 328th Brigade. Karahasanovic denied it was his responsibility to investigate the fate of some fifty Serb soldiers who were first taken prisoner by his unit on 10 September 1995, and then, as he claimed, kidnapped by a group of unidentified Arabs in the village of Kesten on Mount Ozren. The Arabs then took the prisoners away.

The prosecution alleges that the BH Army handed over the captured Serb soldiers to the El Mujahid Detachment, which was part of the chain of command of the 3rd Corps. The defense contests this allegation, arguing that the prisoners were kidnapped by an armed group of Arabs that were not part of the El Mujahid Detachment and the BH Army chain of command.

The witness confirmed this, and added that he had reported the kidnapping of Serb soldiers to his superiors. When the prosecutor asked why he didn’t investigate the incident to find out who had taken the soldiers and where, the witness said that ‘there was gunfire everywhere’ and it was impossible to conduct any investigation. According to the witness, his responsibility ended when he reported the kidnapping to his superiors. ‘If there was anybody who was supposed to do something in a situation like that, it was my commander’, the witness pointed.

The witness was asked about the fate of other four Serb soldiers captured by Arabs on the same day in the village of Kesten and about the kidnapping of three Serb women. They were captured by the members of his units together with 51 Serb soldiers and then sent to the nearest BH Army command post. According to the evidence of witnesses who have already testified in this case, the women were also kidnapped by Arabs en route to the command. They were taken to the El Mujahid Detachment camp, handed over to the BH Army military police and finally exchanged.

Ahmet Sehic, who was the witness’s immediate superior, testified in this case for the prosecution in November 2007. He claimed that Fuad Zilkic, commander of the 328th Brigade, did have information about the kidnapping of Serb soldiers. However, the report Zilkic sent up the chain of command doesn’t say that the Serb soldiers in the village of Kesten were ‘kidnapped’ by the El Mujahid Detachment, but that they were ‘handed over’ to the Detachment.

When Izet Karahasanovic was shown this document, he stated that he ‘couldn’t understand how a commander who had proper training ‘like Zilkic’ could have made such mistake.

The trial of General Delic continues on next Tuesday.