THE ITALIAN COLLECTION OF MUJAHIDEEN DOCUMENTS

The defense of Rasim Delic, former commander of the BH Army General Staff, today cross-examined prosecution witness PW 9 about the Italian documents belatedly disclosed by the prosecution. The documents show that members of the El Mujahid Detachment sent reports to everybody but the BH Army; this was corroborated today by the witness 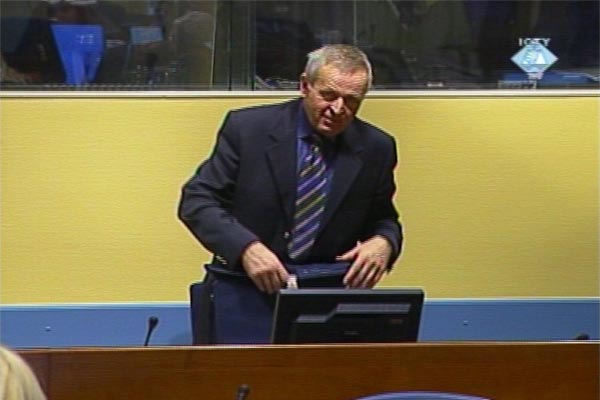 Rasim Delic in the courtroom
PW 9, protected prosecution witness, was recalled for additional cross-examination by the defense of General Rasim Delic. He contends that the El Mujahid Detachment didn’t report to the BH Army on its activities. They reported to sheik Enver Shaban instead, the founder and director of the Islamic Cultural Center in Milan, who was the ‘supreme authority’ for all foreign fighters in BH.

The witness, ethnic Bosniak, was one of the highest ranking local Mujahideen in the El Mujahid Detachment. He testified for the prosecution in mid-November 2007 but the defense recalled him for additional cross-examination after it received the documents seized by the Italian government in the Islamic Cultural Center in Milan. The documents were disclosed by the prosecution three year after it received them.

The defense used this witness to tender into evidence a video recording mentioning Sheik Shaban as the ‘founder’ of the Mujahideen training camps and the witness confirmed this. It is interesting to note that the blind Sheik Omar Abdelrahman appears in the same recording. In early 1996, he was sentenced to life for the attack on the World Trade Center in New York in February 1993. The witness recognized Sheik Abdelrahman but denied he had any connections with the detachment. At that time he was already in prison in the USA.

The witness was shown several documents from the ‘Italian collection’, including several bulletins issued by the El Mujahid Detachment, The Call of the Jihad, that were sent to Sheik Shaban. He in turn forwarded them to potential donors. According to the witness, the El Mujahid Detachment sent such reports to Kuwait, Great Britain, the USA, Saudi Arabia and other countries worldwide, but not to the BH Army.

One of the documents from Italy is a facsimile of a message sent on 7 March 1995 to Sheik Shaban. In it, the El Mujahid Detachment distances itself from the accusations that it had connections with the Egyptian organization Gama Al Islamija and from the suspicion that ‘it was under the control of the Bosnian army’, described in the message as ‘the communist army’. The Mujahideen went on to explain that they maintained their ‘right to respond’ vis-à-vis the BH Army. As the witness said, it meant that they could refuse orders. The detachment members refused BH Army orders on numerous occasions, the witness stated, and the document itself showed that the detachment ‘was not under the control of the BH Army’.

According to the witness, the El Mujahid Detachment was wholly funded from abroad. Its commanders also arrived from abroad, as showed in the documents presented by the defense. The military council of the detachment and its supreme body, the shura, decided independently on everything and reported to its superiors outside of BH, the witness noted.

The evidence of the witness PW 9 continues tomorrow with additional cross-examination by the prosecutor.