Presiding judge asked Lukic’s defense witness to clarify his claim that Albanians gathered in the center of Pec in fear of NATO air strikes before they left Kosovo, while Serbs never did that although they were scared for the same reason 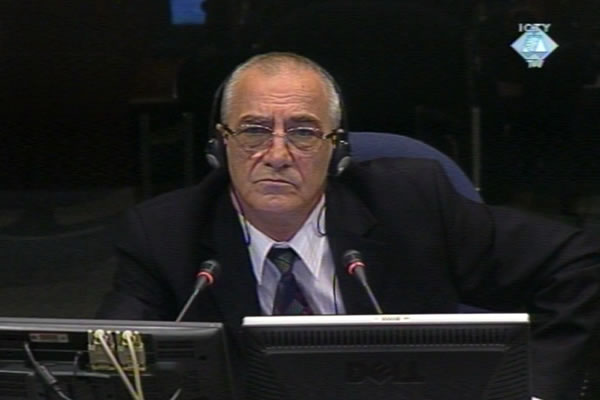 Radovan Paponjak, defense witness for Sreten Lukic
The indictment charging six former Serbian officials with crimes in Kosovo alleges that the army and the police forced Albanian civilians from Pec and adjacent villages to gather in the center of the town on 27 and 28 March 1999. From there, they were deported in buses to the border with Albania and Montenegro. Radovan Paponjak, former traffic police chief in the Pec Secretariat of the Interior testified today in the defense of General Sreten Lukic. He confirmed that the Albanians had in fact gathered in the center of the town in late March. However, he claims that they did it on their own initiative, not because they were forced to do so.

They left the same way they came to the town center, the witness said, of their own free will, on scheduled bus services and in their cars. The police was there only to ’regulate the traffic’. Even if the Pec police had wanted to, they didn’t have enough men to expel so many people, Paponjak stated, saying that the Albanians left even those villages the police avoided to enter in fear of the KLA. According to him, the Albanians left because they were afraid of NATO air strikes.

The presiding judge, however, wanted to know why the Albanians fleeing from NATO air strikes would gather in the center of the town where they were exposed more than anywhere else. In his reply, the witness first said that this was part of some ’preconceived plan’ without specifying what this plan was supposed to entail, and then went on to add that at the time it was safer to move in larger groups. When he was asked if he was aware of Serbs gathering in large groups for safety reasons, he said he wasn’t.

Testifying as a prosecution witness, Edison Zatriqi from Pec stated that the police had broken into his house on 28 March 1999, ordering everybody in to get out in five minutes and join the convoy heading for Montenegro. When Lukic’s defense counsel implied that the police officers were merely ’regulating traffic’ the witness replied that he would not call it ‘regulating’, but ‘directing’.

Current procedural issues affecting the course of the trial will be discussed at a hearing scheduled for tomorrow.