The expert witness testifying in the defense of Johan Tarculovski yesterday compared the way in which the National Liberation Army of the Macedonian Albanians was organized with mercenary activities. Today he went on to conclude that the ‘al-Qaeda did the same things as the NLA but nobody calls them an armed force, but a terrorist organization’ 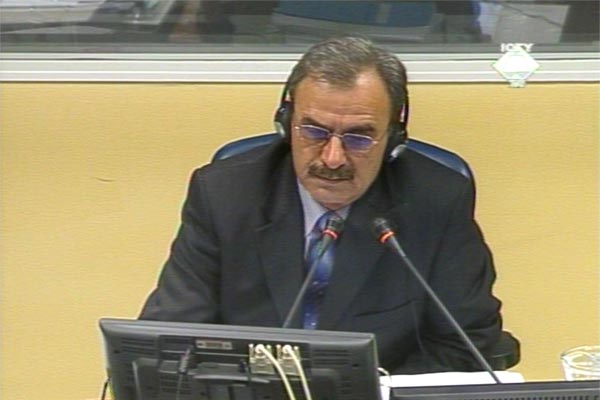 Blagoja Markovski, defense witness for Johan Tarculovski
In his expert report, Colonel Blagoja Markovski confirmed Johan Tarculovski’s defense argument that the village of Ljuboten had been a logistics base of the National Liberation Army of the Macedonian Albanians. At the same time, Markovski contested the evidence given by the prosecution witness that this formation had been ‘a disciplined and organized army’.

The prosecutor, however, noted that ‘if the village of Ljuboten was a logistics base, this required a certain level of planning and organization’. The prosecutor devoted a substantial part of the cross-examination to contesting the expert’s allegation that the NLA had been terrorist organization.

Markovski said he ‘tried not to say it out loud’ but he found himself forced to say that the ‘al-Qaeda is doing the same things’ as the NLA, but ‘nobody calls it an armed force, but a terrorist organization’. He went on to explain when and how the US president Bush declared war ‘on global terrorism’ and how ‘everybody takes part in solving the serious problem in Iraq’.

The prosecutor believes it that ‘partiality and prejudice’ prevented Markovski from ‘accepting the fact that the NLA was an organized military force with a functioning chain of command’. Markovski couldn’t accept the fact that Macedonia was in an armed conflict, the prosecutor went on to say, in which both sides engaged in both offensive and defensive operations while the NLA tried to achieve its political goals.

The defense expert replied that ‘things are not black and white’. In his opinion, which is accepted in scientific circles, he said, there was a ‘crisis’ in Macedonia, one that ‘did not escalate into armed conflict’. The Macedonian security forces didn’t fight back when the NLA provoked them, except ‘in five or six situations’. Markovski added that the NLA members didn’t fight for the implementation of their goals, but of the goals set by the leaders of this organization who now ‘sit in comfortable chairs in the Macedonian parliament’. Those who ‘shed their blood have no rights now’, he concluded.

At the end of the cross-examination, Markovski disagreed when the prosecution put it to him that ‘the police operation in Ljuboten on 12 August 2001 was not legitimate because it violated laws and customs of war’. According to the expert witness, ‘the targets in Ljuboten were legitimate; engaging them was necessary because they were a threat to Skopje’.

When the last defense witness scheduled for Tuesday completes his evidence, the two defense teams will rest at the trial of Ljube Boskoski and Johan Tarculovski. The two are charged with an unlawful attack on the village of Ljuboten.