In his opening statement, Johan Tarculovski's defense contests the existence of armed conflict in Macedonia in 2001. According to the defense, the attack on the village of Ljuboten – Tarculovski is on trial for it – was a ‘legitimate action by the Macedonian security forces’ aimed against terrorists in the village. The order was issued by the then Macedonian president Trajkovski 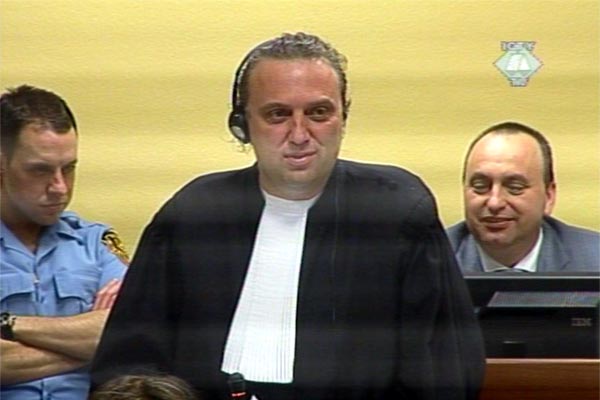 In his opening statement, the defense counsel challenged several issues: the existence of the armed conflict in Macedonia, the jurisdiction of the Tribunal in this case and the military character of the National Liberation Army of Macedonian Albanians. In the words of the defense, ‘the so-called National Liberation Army was a typical terrorist organization’ and its members were ‘a group of criminals’ using violence to ‘humiliate Macedonia and implement their political aim, the creation of a Greater Albania’.

In the second section of his opening statement, the defense counsel spoke of the events prior to the Macedonian security forces' action in Ljuboten. According to the defense, the Macedonian army and the police did not target civilians in that village but a legitimate target – terrorists using the village as their logistics base. The terrorists took shelter in Ljuboten after planting a mine that killed eight Macedonian soldiers. The action in Ljuboten was ordered by the Macedonian president and lasted four hours. As the defense counsel emphasized, ‘no woman, child or elderly person’ was injured in its course. The terrorists were killed and persons whose involvement in the fighting for the ONA had been proven by gunshot residue tests were arrested.

[IMAGE]3275[/IMAGE]Contrary to the prosecution allegations, Tarculovski didn’t have the information on the course of action in the field and was not in control of the participants in the operation, concluded the defense counsel. At the time of the attack, Tarculovski was in charge of the security for the president and his family; his other task was to facilitate telephone communication between the president and the army officer in the village of Ljubanci, two kilometers from Ljuboten, the defense counsel explained.

The defense counsel denied the allegation that Johan Tarculovski was part of the joint criminal enterprise aimed at ‘a direct attack against civilians that could not have been justified by military necessity’. The prosecution, the defense stated, failed to prove the existence of the joint criminal enterprise. It didn’t list its members and did not establish that Tarculovski had had the intent to kill or destroy.