According to General Sreten Lukic’s defense counsel, there is a mistake in the recommendation made by the minister of the interior for the promotion of Sreten Lukic in May 1999: Lukic is said to have ‘commanded and controlled’ police troops in Kosovo. The mistake occurred because the clerks who drafted the document did not have accurate information 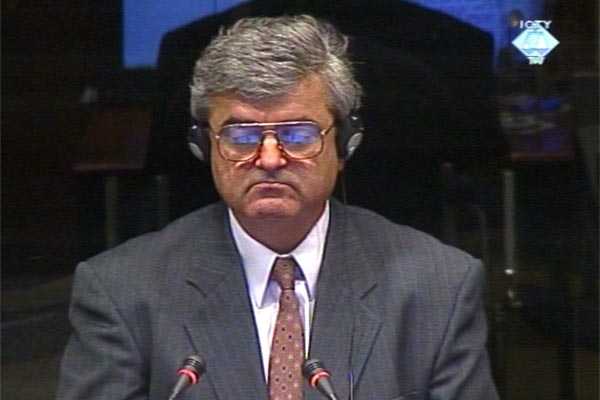 Miroslav Mijatovic, defense witness for Sreten Lukic
In his examination-in chief, retired police colonel Miroslav Mijatovic said that Sreten Lukic, head of the MUP Staff for Kosovo, had not exercised command over the police units in the field. In the cross-examination today, the prosecutor showed him a recommendation for Lukic’s promotion drafted in May 1999 stating the opposite. The then interior minister provides reasons for Lukic’s promotion to the rank of colonel-general saying that Lukic ’successfully commanded and controlled police forces in Kosovo’.

When asked if the minister was so ill-informed that he made such a mistake in his order, Mijatovic said that he was sure the minister didn’t personally draft the document. It was done by one of his clerks, and they ’certainly didn’t know what was going on in the field’. Mijatovic assumes that the person who wrote the recommendation for the promotion simply copied part of the order establishing the MUP Staff for Kosovo, where it was ‘erroneously stated’ that the Staff would command the police in Kosovo. Mijatovic was Lukic’s deputy during the NATO campaign.

The prosecutor claims Mijatovic was not telling the truth when he said that in 1999 the Staff didn’t know about crimes against the Kosovo Albanians. In one of MUP Staff reports, tendered into evidence by the prosecution, it is stated that ‘715,000 members of the Albanian ethnic minority’ left Kosovo from 24 March to 3 April 1999. The prosecutor used the figure presented by General Nebojsa Pavkovic at a meeting of high-ranking state officials for the population in Kosovo at that time – about a million and a half – to calculate that almost half of the population had fled the province. ’So it seems’, Mijatovic agreed. Mijatovic doesn’t deny the fact that the Albanians left Kosovo, but contends they did so because they were in fear of NATO air strikes, not because they were forced to leave by the Serbian security forces.

General Sreten Lukic’s defense continues its case with the evidence of Milos Deretic, former chief of Communications Department in the Pristina Secretariat of the Interior and a member of the MUP Staff for Kosovo. Lukic and five other Serbian former politicians and generals, are on trial for crimes against Kosovo Albanians in 1999.