General Lukic’s defense witness today described what the role of the MUP Staff for Kosovo in 1999 was not, rather than what it was. The presiding judge warned the witness, police colonel Miroslav Mijatovic, that his evidence indicated this was a body of ‘very ill-defined contours’, and that he was unclear as to its purpose. At the time of the NATO campaign, Mijatovic was the deputy of Sreten Lukic, who was the head of the MUP staff for Kosovo 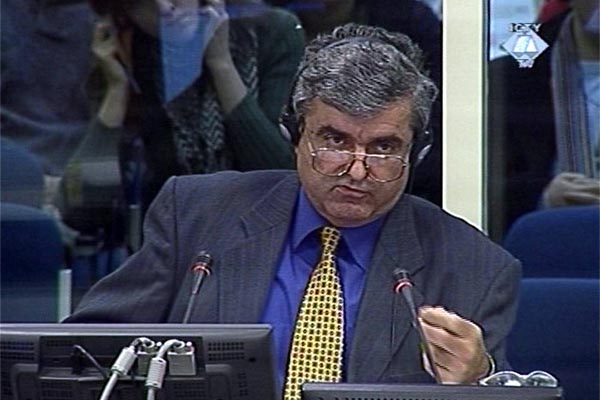 Miroslav Mijatovic, defense witness for Sreten Lukic
At the time of the NATO campaign in 1999, police general Sreten Lukic was head of the MUP Staff for Kosovo, and Colonel Miroslav Mijatovic was his deputy. Now, nine years later, Lukic is in the dock, charged with crimes against Kosovo Albanians. Mijatovic, who has retired in the meantime, is testifying in his defense. According to him, the indictment erroneously alleges that the MUP Staff planned and implemented anti-terrorist actions during the war in Kosovo.

The decision to establish the MUP Staff for Kosovo, from June 1998, states that its task was to 'plan, organize and manage the work' of the police in the province. Mijatovic, however, claims that this was never implemented. The MUP Staff had nothing to do with the PJPs (Police Special Units). It didn't exercise command over the secretariats of the interior in Kosovo, Mijatovic said. According to him, the lower-level bodies of the Interior Ministry operated in accordance with the plans and orders of the Interior Ministry and the VJ Pristina Corps.

The witness explained that the MUP Staff couldn’t influence the course of the anti-terrorist actions. In the field, the units were under the command of their commanding officers who couldn't be influenced by anyone. Furthermore, the communications were disrupted and it was impossible to get in touch with them. The witness was talking about the PJPs, the SAJ (Special Anti-terrorist Unit), the JSO (Special Operations Unit) and all other police units that took part in combat.

The presiding judge interfered, saying that despite all his effort he couldn't understand what the purpose of the MUP Staff had been in the first place. 'According to everything we have heard, this was a body of very ill-defined contours’, Judge Bonomy said. He asked the defense counsel to clarify this conundrum.

Mijatovic continued to deny that the Staff had any command role, saying that Lukic and the other members of that body were sent to Kosovo to provide help if necessary and not to exercise command over subordinate units. It is true that numerous orders reached the Staff from Belgrade, but the Staff only had to forward them to subordinate units, the witness explained.