WHO DESERVES CREDIT FOR THE ARREST 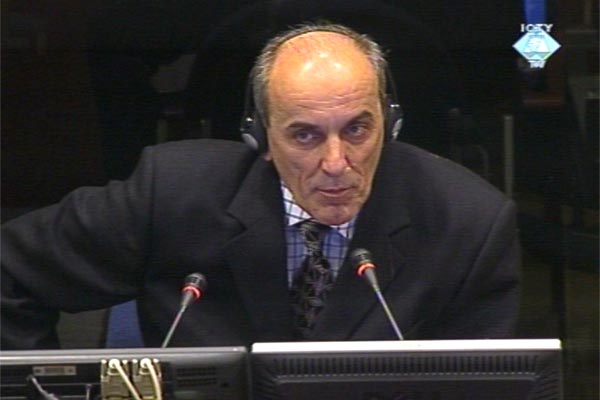 Dusan Gavranic, defense witness for Sreten Lukic
Although the military and police investigative bodies filed hundreds of criminal reports against perpetrators of crimes targeting Kosovo Albanians during the NATO campaign in 1999, only a small number of the accused has been convicted. A rare example of commitment on the part of military courts is the case of Vlado Zmajevic, volunteer in the VJ 175th motorized brigade. He was sentenced to 20 years for the murder of five Albanians in the village of Zegra near Gnjilane in late March 1999. General Nebojsa Pavkovic's defense tried to prove that their client deserved credit for Zmajevic’s arrest. In his evidence today, Dusan Gavranic, former chief of the Gnjilane Secretariat of the Interior testifying as Sreten Lukic’s defense witness, offered a different version of the same event.

Mirko Starcevic, General Pavkovic’s defense witness, who served as Pavkovic’s assistant for morale in the war, said last October that his commander had reacted violently to the reports of the Zegra crime. ’Don’t let me kill the criminal, let him be punished by the court instead of me’, he said. According to Starcevic, that is why Zmajevic ended up before the court. Lukic’s witness Gavranic said, however, that his subordinate policemen arrested Zmajevic as soon as they learned of the crime in Zegra and handed him over to the military judiciary. Gavranic admitted that those murders were not the only crimes committed in the village of Zegra: many of the houses there were burnt down and looted. As a consequence, criminal reports were filed against many soldiers, police officers and civilians. However, in his view, Albanians were not leaving Kosovo because of the murders, arson and looting: they left in fear of NATO bombing.

[IMAGE]3237[/IMAGE]Before Gavranic took the stand, Milos Deretic, former member of the Communications Department in the Pristina Secretariat of the interior and member of the MUP Staff for Kosovo, finished his testimony in Lukic’s defense. The communication between the Staff and the units in the field was disrupted from early April 1999 onwards, he said. The reports were sent by messengers as all communications were down because of the NATO campaign.