WHO DIRECTED REFRIGERATED TRUCKS FROM KOSOVO

Police general Sreten Lukic's defense witness contradicts the testimony of his colleague from the Interior Ministry. In the spring of 1999, the two of them transferred the bodies of Albanians from Kosovo to Serbia. Their stories are similar, the only difference being that one witness said that he had received his instructions from General Djordjevic and the other that he had been told what to do by Lukic 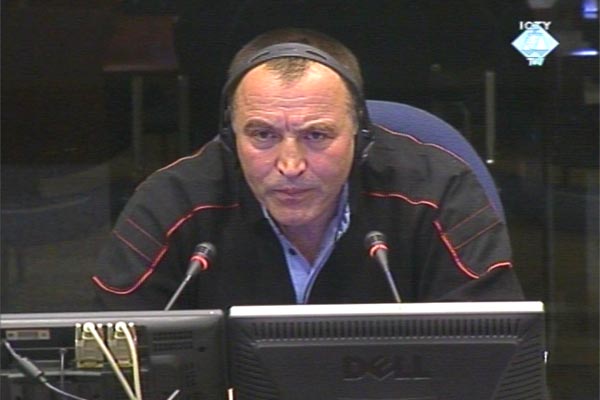 Cedomir Sakic, defense witness for Sreten Lukic
In the spring of 1999, Cedomir Sakic worked for the Serbian Interior Ministry, in the Security Unit. In this capacity, he escorted refrigerated trucks carrying bodies of Kosovo Albanians from Kosovo to Serbia on four occasions. On each of the four times, police officer Bozidar Protic drove the truck. In March 2007, Protic gave evidence as a prosecution witness. He was instructed by police general Sreten Lukic before leaving for Kosovo and before returning to Serbia, he claimed. Lukic is one of the six accused for the crimes in Kosovo in 1999.

Testifying in Lukic's defense, Sakic said that he had received an order from a colonel by the name of Sipovac in late April 1999 telling him to go to Kosovo with Protic and some police officers. According to the witness, Protic took them to a market in Pristina where he picked up a refrigerated truck with the bodies and set off towards Serbia. The witness and other police officers escorted him in police Puchs to Velika Plana. There Protic honked, and indicated they should continue on to Belgrade. Protic exited the highway there and went to Petrovo Selo near Kladovo.

A few days later, Sakic escorted Protic to Pristina once again. They picked up the refrigerated truck in the parking lot of the Rilindija media house. On their way back, they parted at the Batajnica exit, close to Belgrade. Twenty days later, they headed for Kosovska Mitrovica where they waited for the truck Protic drove to be loaded. Sakic asked a police captain what they were doing. 'We are loading Siptars. They were killed by their own, NATO', he replied. The bodies were then driven once again to the base of the Special Anti-terrorist Unit of the Interior Ministry in Batajnica near Belgrade. On their fourth trip to Kosovo, Protic picked up the bodies in the village of Janjevo near Pristina and moved them to Petrovo Selo, the witness said.

In his evidence at the trial of the Kosovo Six, Protic didn't mention their first trip to Pristina, but the details of the other three trips to Kosovo correspond with Sakic's evidence. Protic, however, claimed that he had received instructions for the transfer of bodies from General Sreten Lukic. He called Lukic several times using land lines from various places Kosovo, he said. Sakic contradicted this, saying that when they traveled to Kosovo together Protic used only his mobile phone. On one occasion, Protic even told him that he had talked to Vlastimir Djordjevic, the then chief of Public Security Sector in the Serbian Interior Ministry.

Protic wanted to get even with Lukic for their post-war conflicts, Sakic said. Protic applied for an apartment to the interior ministry, and Lukic didn't want to help him. To corroborate this, Sakic recounted his conversation with Protic in 2005. Protic told him then that he would testify in The Hague and use the opportunity to 'bury Lukic 50 meters under'.