Police general Sreten Lukic’s defense witness claims he saw a CNN reporter hitting an Albanian woman from Kosovo at the Serbian-Macedonian border. She didn’t want to ’testify falsely’ in front of his camera and say that she was expelled from Kosovo by the police, the witness claims 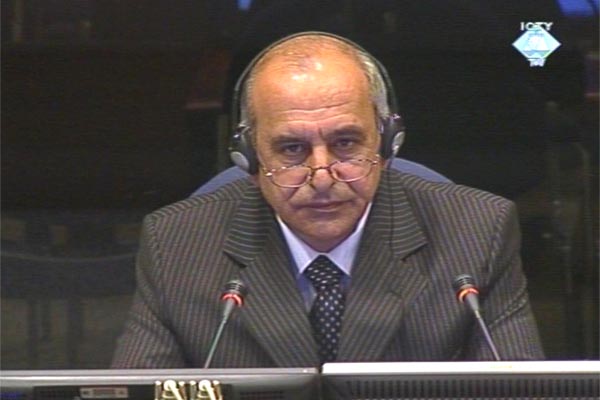 Zivko Lekoski, defense witness for Sreten Lukic
At the time of the NATO air campaign against the FRY, Zivko Lekoski, a Macedonian citizen, was a representative of a Serbian company in Skopje, a fact that distinguishes him from other witnesses who testified in the defense of police general Sreten Lukic. Lukic is charged, together with six other former Serbian politicians and generals, with crimes in Kosovo in 1999. Lukic’s defense team called Lekoski to testify at the trial of the Kosovo Six because of his encounters with Albanian refugees fleeing from Kosovo to Macedonia. One such encounter happened on 27 March 1999 and was very striking.

On that day, the witness said, he went to visit his sister who lived in Blace. Just before the border crossing between Macedonia and Kosovo, he saw two persons standing beside a camera with a CNN label. A group of Albanian civilians was approaching them and a CNN journalist asked them why they were fleeing. They allegedly looked up in the sky saying ’from NATO bombs’. This made the journalist very angry, Lekoski said. ’Don’t say this, say that you are running from the Serbian police’, the man told a woman with a baby in her arms. But she kept on walking towards the border, the witness recounted, and the journalist grabbed her by the arm and hit her when she resisted him. Both the woman and her baby started crying and the cameraman quickly switched his camera on and recorded the refugees in tears. According to Lekoski, the refugees finally agreed to say that Serbian police had expelled them from Kosovo on camera.

On another occasion, the witness was crossing the border at the same crossing on 14 April 1999. He overheard a part of the conversation between a group of Albanian refugees and the police officer who was trying to convince them to go back home. He didn’t see if the efforts were successful, but on his way back he heard that at least a part of the refugees had remained implacable and crossed the border to Macedonia. Lekoski contended that the police and the army were not responsible for seizing and destroying the documents belonging to the Albanians leaving Kosovo. When he crossed the border on 26 April 1999, he saw the leader of a refugee group take their passports away and tear them to pieces. The man told the refugees they had to tell the Macedonian police that Serbs had done it.

In his brief cross-examination, Lekoski said he had worked with Serbia and its authorities in business and in other ways. The prosecution sees this as evidence of the witness’s bias. Lekoski admitted that before the NATO air strikes he was the coordinator in the Macedonian-Serbian Friendship Association, and that in this capacity he met with Zoran Andjelkovic, president of the Kosovo provisional executive council and, as alleged in the indictment, a member of the Joint Command of the military and police for Kosovo. According to the witness, they discussed only humanitarian issues. However, the witness did admit that in February 1999 he said at a press conference in Pristina that he supported the policy of the Serbian and Yugoslav authorities.