INTELLIGENCE KNEW ABOUT KLA TRAINING BUT NOT ABOUT CRIMES

Former number two official in the state security service in Pristina says the Serbian intelligence in Kosovo knew that until the NATO air strikes began the international community was training the KLA and put location finders at Serbian positions. Throughout the year of 1999, on the other hand, he received no reports of any crimes committed by the Serbian police 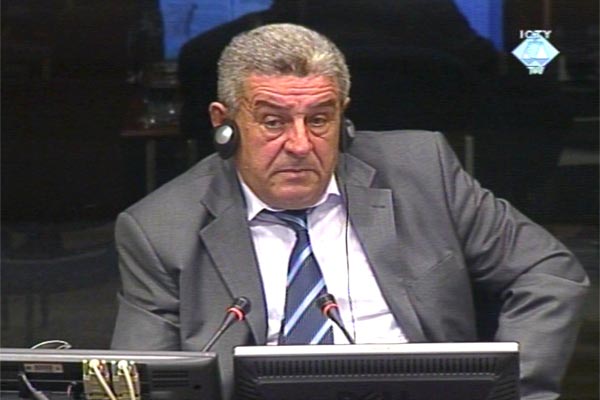 Ljubivoje Joksic, defense witness for Sreten Lukic
Former policeman Dragan Paunovic denied in his evidence yesterday that General Lukic had any command responsibility over the Special Police units, the PJPs. Today, the second defense witness claimed that the accused police general – as the chief of Interior Ministry Kosovo Staff – had nothing to do with the work of State Security and its Special Operations unit, the so-called JSO or ’Red Berets’. Ljubivoje Joksic, former deputy chief of the State Security Centre in Pristina, stated that the JSO was under exclusive command of the Serbian State Security Service chief, noting that he knows of no crimes committed by this unit. The prosecution tried to prove that the JSO, with Milorad Ulemek at its head, had participated in the murders, looting and persecution of Albanians throughout Kosovo in 1999.

The witness accused the OSCE Kosovo Verification Mission of cooperating with the KLA and of training Albanian fighters before the start of the NATO campaign. According to Joksic, the Serbian State Security Service had operational information – ’not substantiated by evidence’ – that location finders had been planted in the buildings months before NATO hit them. The Serbian intelligence service suspected the international observers were to blame for that, because they would go to those buildings to meet with military and police officials. The presiding judge warned Lukic’s defense counsel that the testimony had no weight unless it was corroborated with other evidence. He asked the witness if anybody actually had found the location finders he was talking about. ’We as a service personally did not’, Joksic said, clarifying the issue.

The retired Serbian intelligence officer claims that the State Security Service knew that the KLA members dressed in Serbian military and police uniforms and then went on to commit crimes against Kosovo Albanians. He failed to back this claim with any evidence. The reason why they did so, Joksic said, was to provoke a NATO attack on Serbia as soon as possible. On the other hand, Joksic never heard of a single crime committed by the Serbian security forces against Albanians in the whole of 1999. He himself marveled at the fact that he had learned about the massacre of the Berisha family in Suva Reka only after the war, from the media.

Although he was an intelligence officer during the NATO campaign, Joksic didn’t have any information about the existence of a plan for an operation code-named Horseshoe. According to the prosecution, the objective of this operation was to expel Albanians from Kosovo. The witness blamed this on the German intelligence service, saying that they had disseminated this piece of disinformation. Later on, he ’read somewhere’ that a German general had admitted doing this. Joksic was asked to comment on the claim of prosecution witness Baton Haxhiu, who had said that David Gajic, the State Security Service chief for Kosovo, had told him in 1999 that the army and the police did have a plan for the expulsion of Albanians, code-named Scorched Earth. Joksic confirmed that Haxhiu and Gajic used to meet but ’couldn’t believe’ that Gajic would say something like that, because there was no plan for the expulsion of Albanians.