The first witness to testify in the defense of police general Sreten Lukic described how the KLA used civilians for its purposes in a number of ways. On terrorists’ orders, the women with babies in their arms would leave the villages that the police was planning to attack to ’confuse the police officers with their hysteric behavior’ 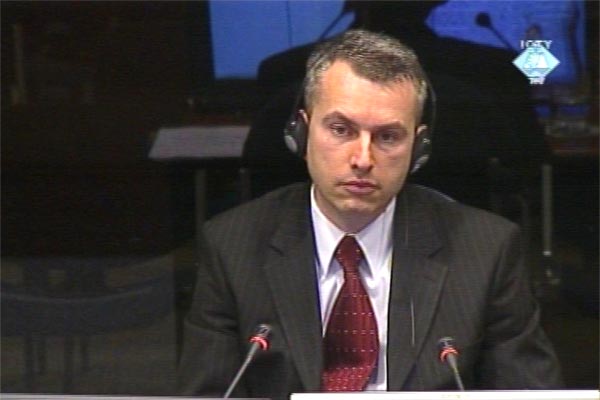 Dragan Paunovic, defense witness for Sreten Lukic
Retired VJ colonel Radojko Stefanovic completed his evidence at the trial of the Kosovo Six. He was the last witness to testify in the defense of the VJ general Vladimir Lazarevic. The defense of police general Sreten Lukic opened its case with the testimony of Dragan Paunovic, former member of the Kraljevo Special Police Units (PJP). The accused Lukic was the chief of the Interior Ministry Staff for Kosovo in 1999, at the time covered by the indictment.

Describing the chain of command in the PJP units, the witness said that the detachment commanders were in charge in the field. They answered to the PJP commander Obrad Stevanovic, and Stevanovic in turn to the interior minister. According to Paunovic, Lukic had nothing to do with the PJPs, whose members are responsible for most of the mass murders, burning of villages and the expulsion of Albanians from Kosovo, the indictment alleges.

The witness attempted to shift the blame for the crimes allegedly committed by the police on the KLA. In his words, the ’Albanian terrorists’ often dressed in Serbian police uniforms and killed other Albanians. In their efforts to prevent the police attacks, they would set the wheat fields on fire and burn down houses in Albanian villages.

A number of witnesses testifying in the defense of the accused military generals spoke of alleged use of civilians by the KLA for its ends. Paunovic expounded on the topic today. According to him, the terrorists forced women to smuggle equipment and weapons for the KLA in their wide skirts and trousers. The tactic was often successful as the police refrained from searching women. The Albanian teenagers and women with children would pass by the police positions, acting as spies and would then relay the information to the KLA. Before the police launched the anti-terrorist actions, women would walk out of their villages with babies in their arms, ’confusing the police with their hysteric behavior’.

As the hearing drew to a close, the prosecutor began the cross-examination, due to be completed tomorrow.