Although the military leadership in Belgrade received regular reports from late April 1999 that police was not willing to comply with Slobodan Milosevic’s orders and agree to be subordinated to the army, General Lazarevic regularly issued orders to the MUP in late May. According to the Pristina Corps operations chief, Lazarevic did so ’because he hoped’ they would finally agree to be resubordinated to the army 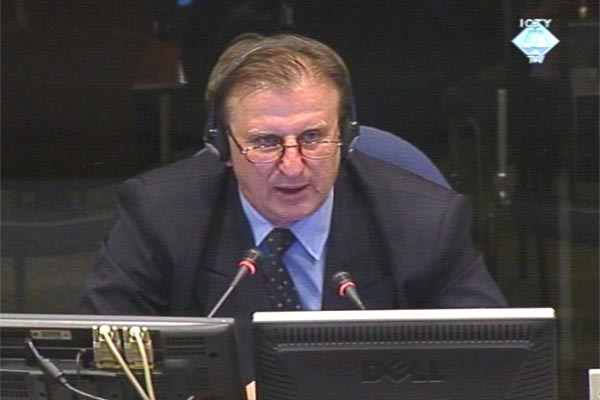 Radojko Stefanovic, defense witness for Vladimir Lazarevic
At the trial of the Kosovo Six, the prosecution tendered into evidence Slobodan Milosevic’s order of 18 April 1999 instructing the police to place its units under army command. In their effort to exonerate their clients from the crimes the police committed against Kosovo Albanians, the defense teams of the military generals claim that the police was never actually resubordinated to the army. Radojko Stefanovic, operations chief in the Pristina Corps during the war, testified in defense of General Vladimir Lazarevic. He said the same thing. According to him, by late April the command started receiving reports from their officers in the field. They complained that the local police commanders refused to subordinate to the army.

When Lazarevic’s order issued on 28 May 1999 to the police was admitted into evidence, the presiding judge asked if it meant that the Pristina Corps commander still hoped that the police would subordinate to the army despite the fact that the Interior Ministry kept on refusing to do so for one month. ‘Exactly, everybody in the army hoped so, even the police was hoping that this mystery would be solved’, Stefanovic said.

Witnesses from the military have claimed that other orders – apart from those issued to the police – were not complied with, including those on the use of ‘armed non-Siptar population’. Stefanovic, a retired lieutenant colonel, explained that the parts of the orders issued by the Pristina Corps command about the use of the ‘armed non-Siptar population’ were merely copied from the orders received from the Third Army but were never implemented. In fact, those were Civilian Protection units under the command of the federal Ministry of Defense, and not the army.

Judge Bonomy intervened again, saying that it ‘sounds insane’ to use this term to describe Ministry forces. Why, he asked, would the Third Army command call for the use of those units if it was common knowledge that the order would not be implemented in the field. ‘You would have to ask the Third Army commander’, the witness replied tersely. General Nebojsa Pavkovic, one of the six accused in this case, commanded the 3rd Army during the NATO air campaign. The prosecution claims that the term ‘armed non-Siptar population’ referred to the armed local Serbian civilians serving in military units. Many prosecution witnesses identified them as perpetrators of the worst crimes in Kosovo in 1999.