Vice-president of the Slovenian Constitutional Court is testifying at the trial of former Bosnian Croat leaders. Today, he repeated his view that Herceg Bosna emerged as a result of Croatia’s territorial aspirations in BH. The defense announces its intention to move for the witness’s expert report to be stricken off the record because it is ’incomplete and outdated’ 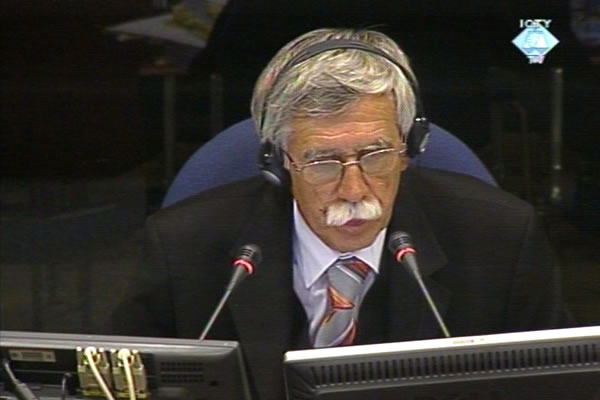 Ciril Ribicic, witness in the trial of the Bosnian Croat leadership
Dr Ciril Ribicic, vice president of the Constitutional Court of Slovenia, is testifying at the trial of former Bosnian Croat leaders. He presented his expert report about the legal structure of Herceg Bosna, which was already admitted at the trial of Dario Kordic. Ribicic today repeated his view that Franjo Tudjman, former Croatian president, had had territorial aspirations to parts of BH. In fact, he said, Herceg Bosnia emerged as a result of those aspirations.

In documents he reviewed as he prepared his expert report, Ribicic noted that Herceg Bosna comprised 30 municipalities which were part of the territory of the Banovina Hrvatska in 1939. He studied the presidential transcripts and concluded that they showed that this territory was considered ‘historically belonging’ to the Croatian nation.

In the cross-examination, the defense pointed to the fact that in 1999 – when he was working on his expert report – the witness didn’t have all presidential transcripts at his disposal. Croatia delivered them to the Tribunal in early 2000. Michael Karnavas, Jadranko Prlic’s defense counsel, indicated he would be moving to strike the witness’s report from the record because it was ’incomplete and outdated’. He quoted to the witness a part of the presidential transcript from 17 September 1992 in which Prlic advocated in front of Tudjman for ’the establishment of BH in compliance with principles of the European Union’.

Dr Ribicic replied that he wasn’t aware of this document adding that even if he had known what Prlic had said to Tudjman, it wouldn’t have influenced his conclusions about the motives for the creation of Herceg Bosna. According to Ribicic, these motives were clearly expressed in the presidential transcript of a meeting of the leadership of the Croatian and BH HDZ from 29 December 1991 that he had inspected together with other transcripts.

Senka Nozica, defending Bruno Stojic, contested the legitimacy of the decision of the BH Constitutional Court of 18 November 1993 declaring null and void the decision on the establishment of the HZ HB. According to her, the decision to institute the proceedings for the examination of the constitutionality of the foundation of the Croatian Community was reached on the basis of press reports. The Court did not have access to the original decision establishing the Community. On the other hand, she said, this document was not signed by the majority of the nine-judge panel of the Constitutional Court. Her knowledge is based on a hand-written record which mentions only four of the five judged who signed the decision.

Although the witness agreed hypothetically that the Constitutional Court should reach its decisions by a majority of votes, he refrained from commenting on the record from the BH Constitutional Court he was shown by Nozica. According to him, it would not be ’professional’ to discuss the contents of the document that in his view should be confidential. Ribicic added that the Tribunal was not in a position to rule whether this decision was legal or not.