A GENERAL’S LIFE IS TOUGH

In the cross-examination of Andrew Pringle, prosecution military expert, accused Slobodan Praljak argued that ‘what is written on paper’ does not reflect the actual situation in the field, and that high-ranking HVO officers were not able to control their subordinate officers and troops. The witness agreed that ‘life was tough’, noting, however, that it was the duty of every commander to make sure his orders were obeyed 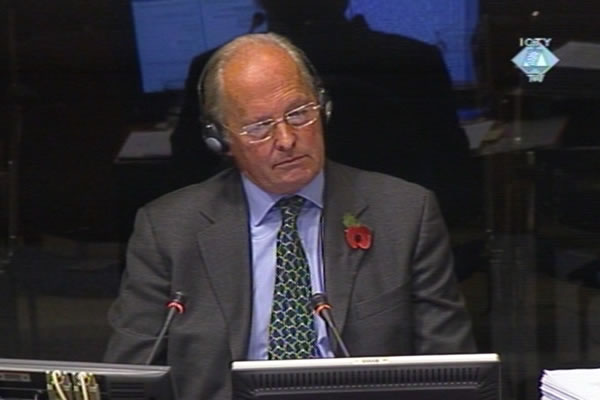 Andrew Pringle, witness in the trial of the former Bosnian Croat leaders
In the cross examination of Andrew Pringle, prosecution military expert, the defense of the six former Herceg Bosna leaders argued that the HVO commanders ‘were not able’ to control their subordinate officers and troops during the Croat-Muslim conflict in 1993.

‘You can put anything you want on paper’, the accused Praljak said, commenting on the witness's opinion that there was a ‘firm and functional military system’ in place in Herceg Bosna, based on the doctrine of the former JNA and clear legislation regulating the sanctions for those who committed crimes. It is impossible to draw proper conclusions about what was going on in the filed from what was written on paper, Praljak contends.

In response to those comments, the British general quoted George Patton, the famous US Army general, who said that ‘it is easy to give order, much harder to make sure they are carried out’. After General Praljak showed him some documents in which high-ranking HVO officers order that Geneva Conventions and international law of war are to be complied with, the witness noted it was the duty of every military commander to make sure his orders are carried out.

Noting he was not ‘an expert for the HVO’, the witness didn’t want to make any specific assessments of those documents. ‘If you mean to say that life was tough,’ he told Praljak, ‘I can agree with that’.

As the cross-examination continued, Praljak had to mention that General Patton, who was quoted extensively by the witness, saw his military career end after he slapped a wounded soldier in hospital. This was precisely because the general’s conduct was contrary to the military rules that must be obeyed, the witness replied.

Milivoj Petkovic’s defense stated it agreed fully with all the claims made in the military expert’s report. It was ‘logical and universal and showed common sense’, the defense went on to say, calling for four times as much time as had initially been allotted to it for the cross-examination. The Trial Chamber dismissed the request. Defense counsel Vesna Alaburic noted she was denied the right to cross-examine the witness. In an hour she had, she brought to the fore the ‘broader context’ of the order issued on 30 June 1993 to arrest Muslim soldiers in HVO ranks and to detain all Muslims of military age in Herceg Bosna. She repeated the defense argument that this order was the consequence of the ‘betrayal’ on the part of the Muslims in HVO ranks.