TROOPS SAW AND HEARD NOTHING

Although he admits that the army was deployed around the village of Kotlina on the day when, according to the indictment, the bodies of 17 Albanian young men were thrown into wells and blown up, the commander of the 243rd Brigade still maintains that his men couldn’t see what was going on down there because of the hilly terrain and couldn’t hear any explosions because they were wearing protective earphones 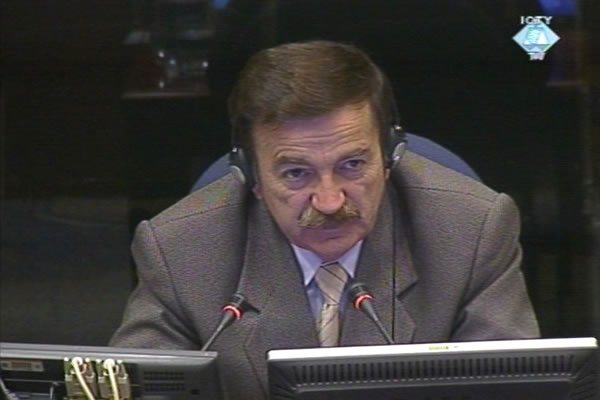 Krsman Jelic, defense witness for Vladimir Lazarevic
In his evidence yesterday, General Krsman Jelic admitted that elements of the 243rd Motorized Brigade he commanded took part in the attack on the village of Kotlina on 24 March 1999, denying that his soldiers entered the village. Today, General Krsman Jelic answered the questions of the prosecution about this incident. Prosecutor Daniela Kravetz confronted him with the testimony of several eyewitnesses who said that some 150 police officers and soldiers had entered the village. The army and police arrested and beat up seventeen Albanian young men. Their bodies were lowered into wells and dynamite was tossed in.

‘This is bizarre, incredible and inhumane, and I condemn those who did it...if they did it’, General Jelic said repeating his claim that none of his soldiers had entered the village after the fight, as the police was in charge of ‘the mop-up’. Although he is not sure about what actually happened, Jelic believes that those Albanians were actually ’terrorists killed in action’.

The prosecutor then told the witness about a forensic report claiming that the bodies of the young men had been blown up to pieces by dynamite. She asked him how such a thing could have happened in the action he ordered and for which he was responsible. The witness clarified that his plan ‘was never implemented’ because the attack was launched in the different circumstances: NATO had already started its air strike campaign. Jelic repeated that he couldn’t be blamed for the actions of the police troops. He was responsible for the conduct of his soldiers who supported the police from nearby hills but didn’t enter the village.

Even if that was the case, the prosecutor contended, the soldiers of the 243rd Brigade subordinated to Jelic had to prevent the crime because they could see what was going on in the village after the police came in from their positions up on the hills. The retired general noted that terrain surrounding the Kotlina village area was ‘hilly and rugged’. This prevented the troops from seeing the entire village, he said, but only parts of it. When the prosecutor noted they could at least hear the explosions, Jelic replied that this was not so: the soldiers wore protective earphones because they were artillery crews.

As the hearing drew to a close today, General Lazarevic’s defense called its next witness: Colonel Milutin Filipovic who was Lazarevic’s assistant for personnel issues during the war.