Contesting General Bozidar Delic’s claim that his soldiers could not have done any looting even if they had wanted to because they carried a lot of combat equipment and had nowhere to put their ‘war booty’, the prosecutor asked a rhetoric question: how much space do money and golden jewelry take? 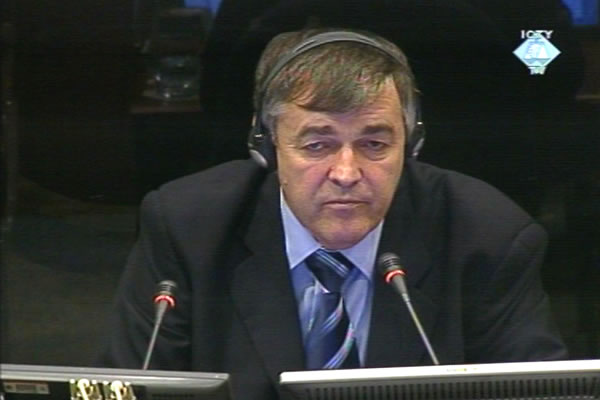 Bozidar Delic, defense witness for Vladimir Lazarevic
‘How much space would a bundle of German Marks or a golden chain take?’, asked the prosecutor as the cross-examination of General Bozidar Delic continued, alluding to the witness’s claim that the soldiers of his VJ 549th Motorized Brigade could not have done any looting even if they had wanted to. They carried cumbersome combat equipment and had nowhere to put their ‘war booty’. Delic didn’t answer the question directly but said that the soldiers couldn’t loot in the course of military actions because they were accompanied by their commanding officers.

He admitted that there had been crimes against Albanian civilians, adding that they didn’t occur during combat but when there were no commanding officers around. Delic stressed again that all the perpetrators were prosecuted: 73 were charged with looting and 60 with other crimes, including murder and rape. The data cover the period from May 1998 to July 1999. According to Delic, the number of soldiers and superior officers who committed crimes is negligible: it is less than one thousandth of the 14,000 brigade personnel.

The prosecutor believes that this number is too small, but not in relation to the number of soldiers but in relation to the number of crimes against Albanian civilians in 1999. General Vladimir Lazarevic, in whose defense Delic is testifying, is charged together with five other Serbian politicians and generals for failing to take ‘necessary and reasonable measures’ in 1999 to punish the perpetrators of gravest crimes against civilians.

As the questioning continued the prosecutor turned to the issue of volunteers in the 549th Brigade. According to Delic, at the time of the NATO campaign there were about a hundred of them, some of them foreign nationals, mostly Russians. One of the photographs tendered into evidence by the prosecution shows Delic together with a man by the name of Damian or Demian Balan, and another Russian volunteer. Another photo shows Balan with a number of police officers and Radoslav Mitrovic, the commander of the 37th PJP Detachment. Mitrovic is currently on trial for the murder of more than forty members of the Berisha family in Suva Reka on 26 March 1999.

Martin Pnishi, a Kosovo Albanian who gave evidence for the prosecution, said that in late April 1999 he saw two Serbian and two Russian soldiers leading a civilian from Korenica into a house and then killing him. Delic said today that an element of his brigade was in action in Meja and Korenica. Their only task was to block off the area. The prosecutor asked Delic to draw on a map the route he took as he passed through the village of Bela Crkva in late March 1999 but didn’t ask him about the claims that only the police, and not the army, had entered Celina, Nogavac, Velika Krusa and other villages in which crimes were committed after the attacks.