ONLY ONE OSCE COMPLAINT FOR THE ’EXCESSIVE USE OF FORCE’

General Krsman Jelic confirms Vladimir Lazarevic’s evidence, saying the OSCE monitoring mission complained only once to the army about the ’excessive use of force’: this concerned the firing of a single tank shell. But, Jelic contends, even that complaint was not justified 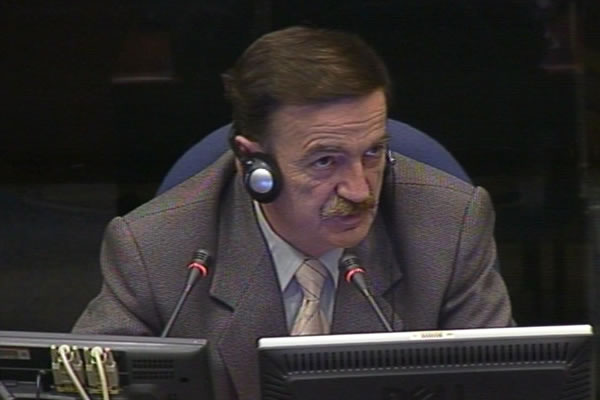 Krsman Jelic, defense witness for Vladimir Lazarevic
After the accused general Vladimir Lazarevic completed his fifteen-day testimony, the defense called its second witness Krsman Jelic, former commander of the 243th motorized brigade. This is the second time Jelic is testifying before the Tribunal. In December 2005 he gave evidence in the defense of Slobodan Milosevic.

Jelic challenged the prosecution’s argument that the VJ resorted to excessive use of force by using heavy artillery to attack Albanian villages with the KLA presence. While all former members of the Kosovo Verification Mission (KVM) who testified as prosecution witnesses claimed that they had complained about that to Serbian civilian and military authorities from October 1998 to March 1999, General Lazarevic said in his evidence that the army received only one such complaint, regarding an attack on the village of Slapuzane from a position in Dulje on 8 January 1999. A single tank shell was fired. Following up on Lazarevic’s evidence, General Jelic said that not even that KVM complaint was justified.

According to Jelic, there was no reason for the army to shell Slapuzane. It was prohibited to use heavy artillery in that area and his unit complied the ban, he added. Besides, Jelic explained, it was impossible to target Slapuzane from the village of Dulje by direct tank fire. There are other villages and a hill in the line of sight. Canadian general Maisonneuve, former head of Prizren KVM office, testified as prosecution witness about the same incident. He said that the tank shell had been fired ‘in the direction of Slapuzane’ and not on the village. Jelic didn’t comment on that statement today.

By the end of the hearing today, Jelic repeated several claims made previously by General Lazarevic, notably that the Interior Ministry troops were not subordinated to the army despite a number of orders issued by the state and military leaders. Jelic’s testimony continues tomorrow.