HOW PRLIC DREW THE DIVISION OF BOSNIA HERZEGOVINA

Ray Lane, former head of the EU Monitoring Mission in Siroki Brijeg, Mostar, Gornji Vakuf and Prozor testifies at the trial of former Bosnian Croat leaders. He contends that Jadranko Prlic was second only to Mate Boban, the first man of Herceg Bosna 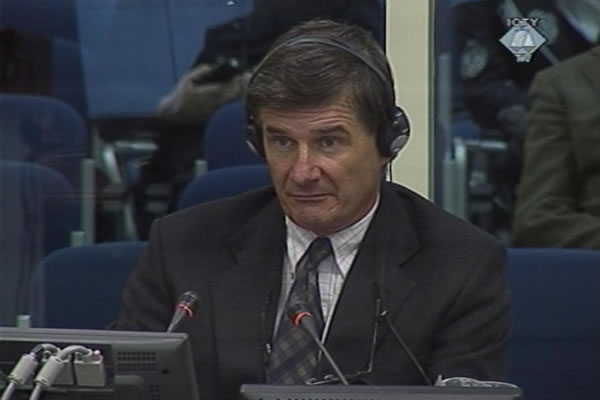 Ray Lane, witness in the trial of the former Bosnian Croat leaders
According to Ray Lane, former head of the EU Monitoring Mission in Siroki Brijeg, Mostar, Gornji Vakuf and Prozor, Jadranko Prlic was the first man of Herceg Bosna, second only to Mate Boban.

Describing his impressions of the leading figures in Herceg Bosna, the witness said that Mate Boban, former president of the self-proclaimed Bosnian Croat community, mainly talked about ‘the suffering of his people’ at the meetings with the EU monitors. Europe should help Croats, he would say.

Asked to comment on the goals advocated by Jadranko Prlic in their talks, the witness said that at a meeting, the former prime minister of Herceg Bosna drew for him the borders of Bosnia Herzegovina on a piece of paper. He drew BH as a circle and then divided it in two with a single stroke of his pen. In Prlic’s view one part was to belong to Croats and the other to Muslims. There was no mention of Bosnian Serbs, the third party, in this plan.

The witness noted that had regularly meet with Bruno Stojic, the Herceg Bosna defense minister and with General Milivoj Petkovic in the course of his mission. After a number of meetings with those Herceg Bosna leaders, his impression was that there was no actual distinction between the military and political leadership of the HVO and that all of them were ‘very well informed’ about everything that was happening in the field. He didn’t have the chance to meet General Slobodan Praljak, but he noted that he ‘heard of him; his presence was felt in the field’.

On the basis of what he experiences, heard and saw during his six-month tour of duty, the Irish officer concluded that the Herceg Bosna leadership wanted that part of BH to ‘get closer to Croatia and enter into tighter union with Croatia’.