Miroslav Rupcic used to be Boban's courier. Today he continued his testimony at the trial of former Bosnian Croat leaders. Mate Boban was ‘big shot’, he said. All the other Herceg Bosna officials were merely ‘small fry’ 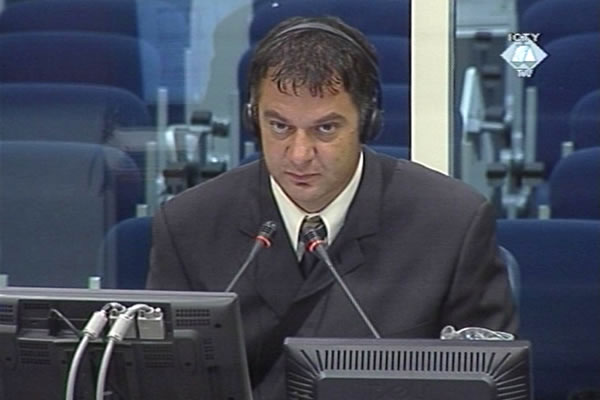 Miroslav Rupcic, witness in the trial of the former Bosnian Croat leaders
Miroslav Rupcic, who used to be Mate Boban’s courier, said that his boss was ‘big shot’ in Herceg Bosna. According to his own admission, he moved bags of money from Croatia to Bosnia and Herzegovina during the war. The money was used to finance the self-proclaimed Bosnian Croat community and, later, republic.

In an effort not to incriminate any of the six Bosnian Croat leaders on trial, the witness said that Herceg Bosna was fashioned after Croatia, with the president as ‘big shot’ while all the rest acting as ‘bit players’, as he put it, apologizing to the accused for any offence his words may have caused. According to the witness, the accused Bruno Stojic, Herceg Bosna’s defense minister in 1993, was among the ‘small fry’.

The prosecutor repeatedly reminded the witness of the statement he gave to the OTP investigators in July 2005, where he clearly said that ‘Bruno Stojic and his assistants decided the priorities for the allocation of money’. The witness was rather unconvincing when tried to explain that in 2005, when he made the statement, he was not aware of the fact that Herceg Bosna’s Defense Ministry had not been founded before the end of 1993.

Prosecutor Kenneth Scott reminded him that, prior to his appointment to the post of defense minister, Stojic headed the Defense Department throughout 1993. By the end of the year, the Department changed its name into the Defense Ministry. This caused a violent reaction of the defense of the six accused. The prosecutor was trying to discredit his own witness, they claimed.

The witness remained adamant that Mate Boban, Ante Jelavic and Pero Majic, sitting in their offices in Grude, were the ones who made the decisions on the financial transactions, while Prlic, Stojic and others, located in Mostar, were just ‘small fry’. He confirmed that they could be reached by phone at any time and that they came to Grude ‘at least once a month’ to meet with Boban. The discussion of this topic continued in closed session.

The prosecution pointed to a document issued by the Office of the High Representative in BH in March 2001 which accused the leaders of the HDZ BiH party, headed by Jelavic, of an attempted coup d’état because they proclaimed the Croat self-government after losing the elections. Saying that he was ‘eternally grateful’ to the prosecutor for asking this question, the witness said he was dismayed by the fact that he ‘was the only Croat sentenced to two years in prison for the self-government thing’, despite the fact that he was ‘a mere cipher’, while the people who were behind it walked free.

The witness continues his testimony tomorrow. He will be cross-examined by Jadranko Prlic’s defense.