According to Goran Krcmar from the Republika Srpska Missing Persons Commission, who is testifying at the trial of Rasim Delic, the BH Army handed a group of some fifty captured VRS soldiers over to the El Mujahid Detachment on 10 September 1995 in the village of Kesten on Mount Ozren. The indictment alleges that they were probably executed subsequently 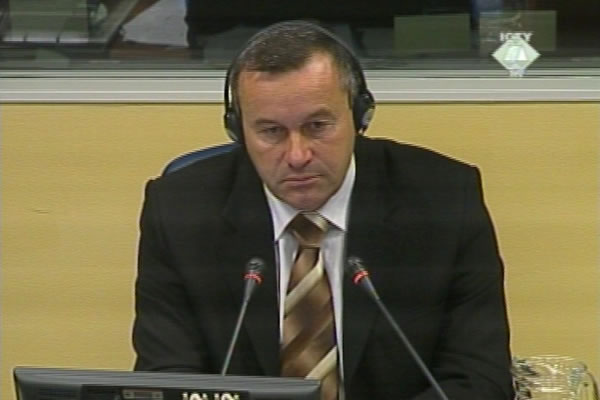 Goran Krcmar, witness in the Delic trial
Goran Krcmar from the Republika Srpska Missing Persons Commission is testifying at the trial of Rasim Delic. He claims that the BH Army handed a group of some fifty captured VRS soldiers over to the El Mujahid Detachment on 10 September 1995 in the village of Kesten on Mount Ozren. According to his evidence, these prisoners were taken to the Mujahideen camp in Gostovici. They disappeared without a trace and they are presumed dead.

In his statements to the OTP investigators in December 2005 and June 2007, tendered into evidence by the prosecution, the witness described the exhumation of the graves discovered near the Gostovic river, just a few kilometers from the El Mujahid Detachment camp. According to him, the graves contained the remains of seven VRS soldiers. The DNA analysis showed that six of the seven bodies were on the list of 51 prisoners handed over to the Mujahideen in the village of Kesten. According to both the prosecution and the witness, the list was compiled by the BH Army on 11 September 1995.

In the cross-examination, the defense referred to another list given to the prosecution in April 2006 by Nikola Radovanovic, the then BH minister of defense. It is a list with names of 49 missing persons made by the VRS that closely resembles the list presented by the prosecution. When the defense counsel Patrick Robson asked for an explanation for the discrepancies in the names, years of birth and places of residence, the witness answered that it was ‘clearly’ a case of ‘misprints’. He was not able to explain how it was possible for a name to be on the VRS list with an indication that the body was found prior to April 2006 when the Gostovici site was not exhumed before June 2006.

The witness refused to answer further defense questions about the VRS document, saying that he saw it today for the first time and that he doubted its accuracy. He persisted in wanting to testify based on the amended missing persons list he had provided to the prosecution. Despite this, the list was not shown to him during his testimony.

The defense proceeded to tender into evidence the VRS missing persons list, but the Trial Chamber would not admit it through this witness. The trial continues on Monday with a new prosecution witness.