Dr Sabiha Silajdzic Brkic, forensic medicine expert from Visoko, testifies at the trial of Rasim Delic, former commander of the BH Army General Staff. She autopsies the remains exhumed in June 2006 from a mass grave in Kamenica near Zavidovici 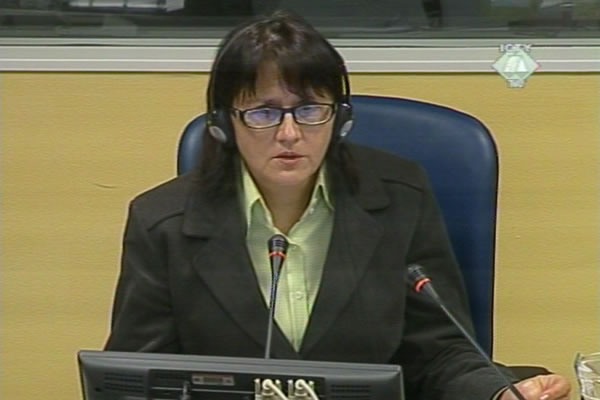 Sabiha Silajdzic-Brkic, witness in the Delic trial
Dr Sabiha Silajdzic Brkic, forensic medicine expert from Visoko, testified at the trial of General Rasim Delic. She gave evidence on the autopsy she conducted on the remains of bodies exhumed in mass grave in Kamenica near Zavidovici in June 2006. Discovered grave site was located at the Gostovic river bank, several kilometers from the place where the El Mujahid Detachment located its camp in 1995.

In her examination-in chief, Dr Silajdzic Brkic specified that eight bodies had been exhumed from the Kamenica grave site. Seven of the eight bodies had been decapitated, she said. Seven skulls were found in the same grave, in a separate pile. The preliminary results of the DNA analysis conducted by the International Commission for Missing Persons (ICMP), forwarded to the witness, confirm that some of those skulls belonged to the headless skeletal remains found in the grave. The analysis of all samples hasn’t been completed yet.

Bone samples sent for DNA analysis were taken in the presence of Dr Zeljko Karan from Banja Luka. Goran Krcmar from the Republika Srpska Missing Persons Commission was present too, as far as she could remember. Krcmar testified last week in this case. The remains of seven VRS soldiers whose names were among the fifty-one on the list of prisoners purportedly handed over to the El Mujahid Detachment by the BH Army were found in the Kamenica grave, he claimed.

The witness examined the bones and skulls in Visoko, and was able to conclude that the possible cause of death for most of the bodies found in the grace was the severing of the cervical vertebrae. The cut was ‘straight and smooth’, she concluded.

In her cross-examination, the witness agreed with the defense that Kamenica was probably a secondary grave. The bodies of victims were probably buried elsewhere and were later transferred to the Kamenica grave.

The witness testified today about the first part of her Kamenica exhumation report and will return to the stand once more before the end of the prosecution case. The trial of the former commander of the BH Army General Staff continues tomorrow with the evidence of another prosecution witness.