PRISONERS AND MUJAHIDEEN WERE NOT TO BE MENTIONED

In the cross examination of Izudin Hajdarhodzic, General Delic's defense notes that the 35th division intelligence reports to the superior command, that of the BH Army 3rd Corps didn't mention captured Serbian soldiers and El Mujahid Detachment. The Detachment took part in the operations Spring 2 and Farz 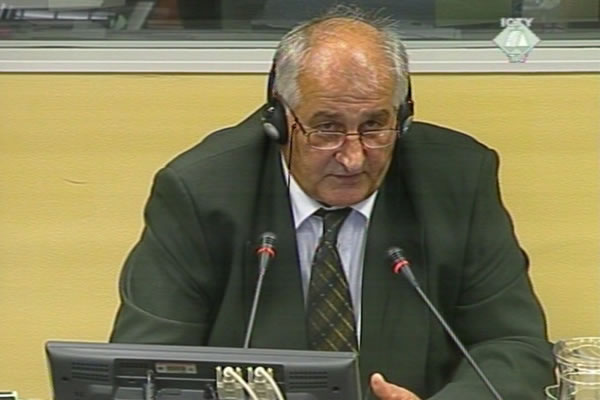 Izudin Hajdarhodzic, witness in the Delic trial
On 21 July 1995, Izudin Hajdarhodzic, former assistant commander for intelligence in the 35th Division, sent an intelligence report to the 3rd Corps Command. In it, he made no mention of the fact that he saw at least one captured Serb soldier in the Livade village being mistreated by the Mujahideen. When Rasim Delic's defense counsel asked him why he hadn't reported that, Hajdarhodzic answered that he had expected that Fadil Imamovic, assistant commander for security, would do it. They went to Livade together and saw the Mujahideen abuse the captured Serb doctor Branko Sikanic. According to his testimony, prisoners of war were in the purview of the security officers, and not intelligence.

In his cross examination, the defense tendered into evidence a large number of intelligence reports signed by the witness that speak of the 'successes of our units' and 'losses of the aggressor'. Mention is made of 'captured vehicles' or 'equipment and materiel, but none of them speak of captured enemy soldiers or of the participation of the El Mujahid Detachment in operations Spring 2 and Farz under the command of the 35th Division between July and September 1995 on the Ozren front. The defense contends this is an indication that the information on the prisoners of war and the Mujahideen was not relayed to the superior command. It was thus impossible that it could have reached the commander of the General Staff, Rasim Delic. Delic is charged with failure to prevent and punish the Mujahideen crimes against prisoners of war and civilians.

In the re-examination, the prosecution confronted the witness with reports from units and commands in the BH Army that mention both the prisoners of war and Mujahideen. An interim report talks about soldiers of the VRS Prnjavor Brigade held captive in the El Mujahid camp. A combat report sent by the 328th Brigade of 13 September 1995 notes that 61 enemy soldiers were captured. This report reached the 35th Division command, but Hajdarhodzic didn't include it in the comprehensive report that he sent to the 3rd Corps command. Today he was unable to explain why, although he admitted it would have been 'logical' to inform the superior command of such a large number of prisoners of war.

The judges admitted they found it ‘difficult to believe' that Hajdarhodzic, a military intelligence officer was so uninformed. They asked him whether he had received any instructions not to mention POWs and Mujahideen in his reports. The witness categorically insisted there had been no instructions of that kind.