Former VRS soldier taken prisoner in July 1995 on Mount Ozren testifies about the mistreatment in the Kamenica camp run by the Mujahideen. He described how he was forced to kiss the decapitated head of another prisoner 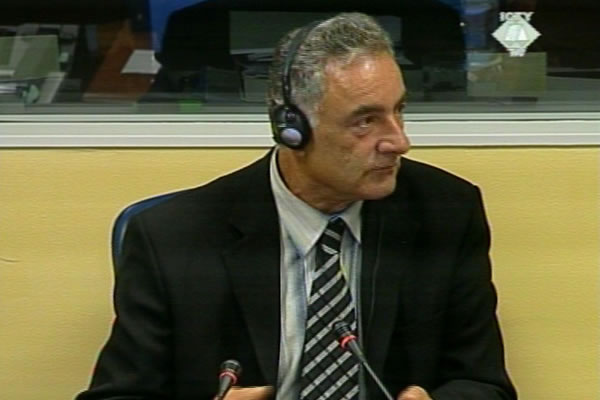 Krstan Marinkovic, witness in the Delic trial
Krstan Marinkovic, farmer from the Prnjavor area, is one of the twelve VRS soldiers captured on 21 July 1995 near the village of Krcevine on Mount Ozren. They were captured by ‘the Mujahideen and Bosnians’ as he explained today in his testimony at the Rasim Delic trial. He described the former as ‘dark’ and the latter as ‘fair’. The prisoners were first taken to the village of Livade where they were beaten by soldiers and civilians, including women and children. They were then detained in a house for two days and two nights. In that time, they were beaten, threatened and insulted by the ‘Mujahideen and Bosnians’.

Two days later, they were put on a truck and taken to Gostovici under escort of the ‘Mujahideen and Bosnians’. The indictment alleges that a Mujahideen camp, known as Kamenica, was located in Gostovici. There, they were put in a burned-down house with no roof, wit two tall chimneys. The second night after their arrival in Kamenica, the prisoners were taken out of the house, their legs were tied with rubber hoses filled with air and left to lie facedown all night. The prisoners moaned in pain and begged for water. At one point one of the prisoners, Gojko Vujicic, cursed and said, ‘Give me water to drink and then kill me’.

A while later, Marinkovic heard shots and then there was silence. In the morning, someone ripped off his blindfold and threw Gojko Vujicic’s decapitated head in his lap, ordering him to ‘kiss his brother’. Marinkovic did it, and was then lifted off the ground and taken into the house where a Mujahid hung Gojko Vujicic’s head.

The remaining 11 prisoners of war were in the Kamenica camp until 24 August. They were subjected to daily abuse and humiliation, and were then transferred to the Zenica prison. The prosecutor tendered into evidence the document with the names of the surviving 11 prisoners. Gojko Vujicic’s name is not on the list.

In the cross-examination, General Delic’s defense used previous statements made by the witness to make him confirm that the Bosnians he had seen in Livade and Kamenica had not been BH Army troops but ‘local Mujahideen’. The witness maintained that ‘the Mujahideen are Mujahideen and Bosnians are Bosnians’. When a judge asked him about the uniforms, he replied that ‘Bosnians had camouflage uniforms’ and the Mujahideen wore ‘something like skirts’. Delic is on trial for the failure to prevent or punish the crimes committed by the El Mujahid Detachment.

Another survivor from the Kamenica camp will testify tomorrow.