PRISONERS OF THE EL MUJAHID DETACHMENT

Velibor Trivicevic is a former medic in the VRS 1st Prnjavor Brigade. At the trial of Rasim Delic, former commander of the BH Army Main Staff, he describes the mistreatment and torture in the Mujahideen camp in Kamenica after his capture on 21 July 1995 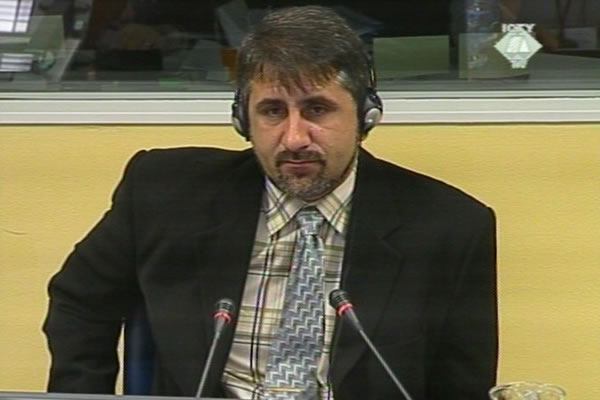 Velibor Trivicevic, witness in the Delic trial
On 21 July 1995, Velibor Trivicevic found himself surrounded by the Mujahideen. He put his hands up in the air, but they apparently didn’t understand his intentions. They continued shouting in Arabic, pointing their rifles at him. Then, a Bosnian who was with the Mujahideen explained to him that ‘among the Arabs, the sign of surrender is when you lie down on the ground with your hands behind your head’. Trivicevic, who was a medic in the 1st Prnjavor Brigade did that, as did the brigade doctor, Branko Sikanic.

They were both captured about 300 meters from the frontline near the hamlet of Krcevine, in front of the house used as a ‘forward medical station’. From there, the Mujahideen took him to the Livade village. They stopped several time en route and mistreated the prisoners in various ways.

The abuse continued in Livade. As Trivicevic described it, at one point there was a racket and shouts of ‘Allahu akbar’ in front of the house where they were detained. A Mujahid came in, with a severed head in his hand. He asked them if they knew whose it was. Although Trivicevic recognized Momir Mitrovic, he said he didn’t know who it was. The Mujahid then put the head into a cardboard box and left, only to reappear with another head. Again he asked them the same question and the prisoners said they couldn’t recognize the head. Trivicevic learned later that it was Predrag Knezevic’s head. He was a member of the 1st Battalion in the Prnjavor Brigade, just like Mitrovic.

From Livade, Trivicevic was transferred to the Mujahideen camp in Kamenica with eleven other Serb prisoners. The camp was some ten kilometers away from Zavidovici. In the courtroom, Trivicevic drew a detailed map of the camp, indicating the house where they were held captive, the command tent and another, even larger tent used for prayer, the sports grounds where the Mujahideen had their roll call. Around it were the tents where they slept.

Just like the Krstan Marinkovic, the previous witness in this case, Trivicevic described in detail the night of 23 July 1995. The prisoners were taken out of the house and left to lie facedown in the meadow in a ‘semi-hanging position’, as he described it. Because the blindfold he had on was not fully opaque, he was able to see the killing of Gojko Vujicic, who was first shot in the temple and then his head was cut off. The other prisoners were then forced to kiss the severed head, which hung from a hook on a wall. That afternoon, the Mujahideen emir – commander – came and took Gojko’s head off. He shouted at the guards angrily.

On 24 August 1995, the 11 survivors from Kamenica were transferred to the Zenica prison, under BH Army escort. Trivicevic was held there until 7 January 1996.

In the cross-examination, the defense contested the claims that Mitrovic and Knezevic were killed after their capture, noting that they could have been decapitated in the fighting, and that their heads could then have been brought to Livade and shown to the captive Serb soldiers. The witness agreed that he hadn’t seen the actual killing, but rejected the defense argument that Mitrovic and Knezevic could have been killed on the battlefield. Blood was trickling down from the heads when they were brought in which meant, he contended, that they had been ‘freshly cut off’.

In response to the judges’ questions, Trivicevic replied that the Bosnians he’d seen in the camp were the ‘local Mujahideen’, members of the El Mujahid Detachment. BH Army soldiers would come to the camp from time to time, he added. The Mujahideen allowed them to beat the captive ‘Chetniks’. In the Zenica prison, Trivicevic and other prisoners were told not to mention the Mujahideen to the International Red Cross personnel, but to say they had been captured by ‘a BH Army assault group’.