3RD CORPS DOCUMENTS: RELIABLE OR NOT?

General Rasim Delic’s defense challenges the reliability of BH Army 3rd Corps documents tendered into evidence by the prosecution through Safet Sivro’s testimony. Did the 3rd Corps respond to an attack on Zenica by opening artillery fire ‘on Doboj’ or on ‘the command post of the Doboj Operational Group’? 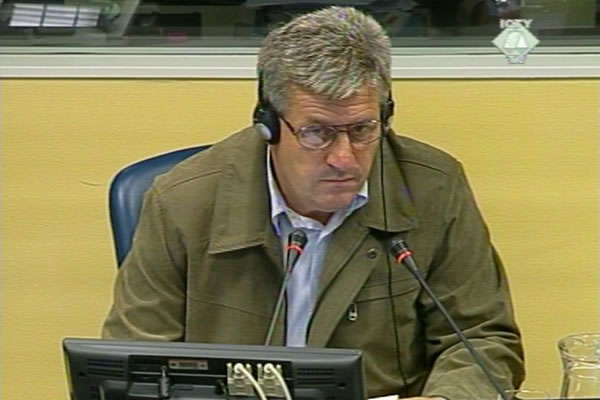 Safet Sivro, witness in the Delic trial
Safet Sivro, former desk officer in the Operations Center of the BH Army 3rd Corps, took the stand today at the Rasim Delic trial. The prosecutor tendered a number of documents through his testimony: operational and war logs, regular combat reports and combat readiness analyses, sent to the BH Army General Staff in August and September 1995, during Operation Farz. According to the indictment against Rasim Delic, who was the commander of the BH Army Main Staff, members of the El Mujahid Detachment committed a number of crimes against Serb civilians and prisoners of war during the operation.

The witness was able to identify the documents shown to him by the prosecutor, confirming that some bore his initials and that he had drafted them himself. He did not discuss the contents of the documents, and the prosecutor didn’t ask him to. When the judges asked what the purpose was of tendering documents in this manner, the prosecutor replied that some prosecution witnesses had already spoken about their contents and more would do so in the future.

Judging by the persistent efforts of the defense to prove the documents were improperly drafted and that they contained unreliable information, the content is not favorable for the accused general. At the beginning of the cross-examination, Vasvija Vidovic, General Delic’s defense counsel, got the witness to confirm that he had not been adequately trained to do the jobs he did in the Operations Center, that the BH Army had few trained officers and that the Corps combat reports were drafted on the basis of the information received from subordinate units. No efforts were made to verify the reports. Some of the documents were not certified and logged properly, they contain inaccurate data about distribution, and a number of pages are missing from one of the operational logs, the defense contends.

To highlight the unreliability of those documents, defense counsel Vidovic quoted the entries concerning the same incident on 26 September 1995 in the operational log and in the war log kept in the 3rd Corps. Both indicate that two shells were fired on Zenica around 6 p.m. from ‘Chetnik positions’, but they provide contradictory descriptions of the response of the 3rd Corps commander. According to the operational log, he ordered that ‘three artillery shells be fired on the town of Doboj’. According to the war log, the order was, ‘fire three howitzer rounds on the command post of the Doboj Operational Group’. The witness agreed with the defense counsel that there was a substantial difference between the two and that it did indeed indicate the documents used by the prosecution to prove its case were unreliable.

When Judge Harhoff asked where the command post of the Doboj Operational Group was – in the town itself or outside of it – the witness replied it was in the town of Doboj.